For Father's Day last month, Mary gave me a bag of coffee beans and a couple of books. One of the books is an historical novel by Michael Punke entitled Ridgeline.  The book tells the story of  “the Fetterman Massacre,”  a massacre of 60 or so Federal troops and a couple of civilians that took place during 1866 in a Wyoming valley.  The event took place a few miles from a newly built fort.  Wittingly or unwittingly, the US Army built the fort on some traditional hunting grounds of the Sioux, pursuant to a treaty into which certain Sioux entered, Sioux who lived nowhere near there and who had no authority whatever over the tribes who did. 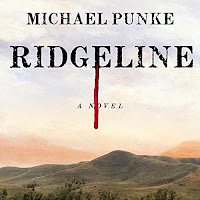 The fort is known as Ft. Phil Kearny.  There were about 400 officers and men stationed there, as well as a number of civilians, including wives and children of some of the men.  All of the senior officers and many of the other troops stationed at the fort were holdovers from the Civil War.  Some of those holdovers included individuals who had fought for the Confederacy.  In the following passage from the book, the author introduces the Confederates while describing a conversation about food around a campfire among some of the enlisted men:

A new speaker joined the conversation, and his accent .  .  . told a story –  a Georgia drawl as thick as tar. .  .  Barely two years earlier, the Georgian had stood on the opposite side of the battle lines from some of the men at this very campfire. There were plenty of former rebels in the Second Battalion – “galvanized Yankees,” they called them, Confederate prisoners of war given early release if they agreed to renounce the rebellion and enlist in the frontier army.

In the early 1950’s, my father visited his widowed mother (Hettie Louise Johnson Stokes) in Atlanta to help her "break up housekeeping" as people called it and move to Miami Springs.  (In Miami Springs she would live with my dad's sister, Frances Stokes Harris, her husband, Harold, and their two children, Ken and Tim.  The Harris family had earlier moved from Greensboro, North Carolina, to a house not far from ours.)

My father told me that, as he was going through some old paperwork in my grandmother's home, he came across a pension certificate issued to his grandfather by the US Army, a grandfather that, at least as he understood it, had fought honorably for the South.  He asked my grandmother about that matter.  A little embarrassed, she said the grandfather had, indeed, fought on the Confederate side, but in one battle he had been captured.  His captors offered him a proposition: he could spend the rest of the war in a military prison or he could join the Union Army and go out west to “guard the Indians.”  He would not be required to fight against the Confederacy, they told him.  He accepted that proposition, served out West, and again conducted himself honorably. Upon his discharge, the federal government awarded him a pension.

Of course, when I read the above passage from Ridgeline, I thought about the matter of my father’s grandfather fighting for both the Yankees and the Rebs.  But I could not recall which grandfather that would be.  On my Grandmother Stokes’ side, there were the Johnsons:  All I recall about my dad's maternal grandfather was that my dad referred to him as “Pappy” and that he was from Dade County, Georgia.  But on the other side, on my father’s paternal side, there was Greenberry Jefferson Stokes.

My family knows a little about this ancestor with the unusual name.  Mainly we know that as a soldier, he was part of Confederate General John B. Gordan’s “Raccoon Roughs,” a volunteer company raised in Alabama.  We not only have a photo of him but also a photo taken at an1889 reunion of his Rebel Company.

I am not at all proficient with genealogies.   But via the internet, I found my way to a National Park Service website that has, among other things, a directory of soldiers who fought in the Civil War for whom records are preserved in one of the national archives.  One enters a name and the website will give a limited amount of information.  For example, if there are records for the “Union” army it will show you the number of those records in the archive.  If there are army records for the “Confederacy,” it will show the number of those records.

For Greenberry Jefferson Stokes, there are 1,196 Confederacy records.

For Greenberry Jefferson Stokes, there are 925 Union records.

My son, Walter, who has done some genealogical work, confirms that it was Greenberry's pension certificate that my father discussed with my grandmother.  (Or maybe Walter remembers this story from my father better than I do.)

But I would like to know at which Yankee fort in the West he was stationed.  It is possible it was at Ft. Phil Kearny.  But if he had been stationed there, then at the time of the massacre of a number of the forts troops, he must have been back at the fort.

He was back at the fort:  Where any self-respecting Stokes would be, if he could be there honorably, when the environs are full of unhappy Sioux and their allies, the Cheyenne.