It's All About Displacement 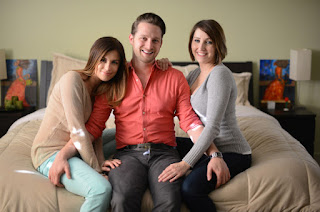 What could we say that is wrong with this relationship and be able to say it without moralizing.  A question comes to my mind immediately, and it is, "How does this work?"  I think an accurate response to that question must be that most modern of all non-answers, "It's complicated."  Another non-answer, but probably as truthful as the prior non-answer is, "It probably doesn't."

But what puzzles me is the extra time this must take for all concerned and how they will deal with that problem.  We have it in our cultural memory: "Three's a crowd."  Assuming that gender matters (as I do), these three people are not the same.  We have two females and one male.  In the group, the male is special in a technical and, finally, practical sense.  But one could persuasively say that each is special, unique, one of a kind.  How does the male parcel, how does he measure, himself out to the other two?  How does each woman (the women are described as "bi-sexual") parcel herself out to the other two. How does one of these people not displace one of the others in all sort of essential ways at any given point.  The most essential way is simply time, it seems to me.

And if a relationship is displaced by someone else, then it is less nurtured.  I don't think this arrangement can work, simply speaking.  It won't work.  This is a snap shot, but I can imagine the movie and how it ends.  In fact, I don't have to wait for the movie, I already saw the play.
Posted by Paul Stokes at 5/31/2017 09:02:00 AM No comments:

"The problem is that a normal reading of the English suggests Jesus is talking about a single ask, a single attempt at seeking, a single knock on the door. Of the three, the meaning of “seek” is most likely to be heard as continuous .  .  .  , but “ask” and “knock” sound punctilear."  Thus, Bill Mounce writes in a blog-post entitled Aktionsart and Ask, Seek, Knock (Matt 7:7-8).

("Punctilear" sent me to my Webster's Second.  It is the the adjective form of "punctilious," which means "scrupulously exact in detail or form.")

So this is a one-off event: we ask, we knock, Kirk out.  Bill says, no, and explains why in his post.  I would like to think Bill is right.  Jesus has other places where he says, "Keep on asking."  My mind jumps to the widow and the judge, sometimes called "The Parable of the Persistent Widow,"  Luke 18:1-8.   We are never to give up asking of God, seeking of him, knocking, knocking.

But isn't it a characteristic of friendship that our friend need not even be asked?  He sees our wants our needs, approximately simultaneously if he really loves me, or at least he certainly should.  I have a law partner whose way of dealing with people who are important to her in this respect is to tell them, "Tell me what you want!"  She doesn't want to make a mistake; she understands the limits of her "sensitivity," that is, her ability to read minds; she is more than busy.  "Tell me what you want."  And if you know what you want (that itself is often a question), she'll give it to you.  But God has no excuse.  He is all knowing, etc. Why should I even have to ask.  Or keep asking and asking, as Bill Mounce suggests is the more accurate translation of Matthew 7:7 - 8.

If we keep on having to ask and if God is our friend, then maybe the asking is good for us.  "How do I love thee.  Let me count the ways."  Seems to belong here.  Ways he loves us is getting us to rephrase the question again and again.  We grow with each effort.  We begin to see ourselves as God or the other person may see us and we begin to examine our felt-need.