I am reading Steve Peifer's, A Dream So Big - Our Unlikely Journey to End the Years of Hunger.  I sometimes catch a few pages in the lunch room, but MetroRail is where I can read without interruption.  I have to be careful when reading the book, because Steve has a way of dropping in stories that make the tears well up and run down my cheeks.  So be warned.

I didn't cry about a story on page 142, where I am now, but I did have to stop and post about it, even though I have a crushing amount of work to do:  It's about "a young man named Moses" whom Steve met in Nairobi when waiting for a shipment from the states to be inspected.  Steve writes that Moses "was a newlywed and made a fair living at the freight yard, but lived in one of the worst slums in Kenya."  Steve asked why he lived there. "He explained that because he was the eldest son in his family, it was his duty to help his younger brothers and sisters complete their education.  Because he was currently paying his younger brother's school tuition, he could not afford any housing except the slum."

What first struck me is the very high value I assign to living in a safe, comfortable home in Miami Springs.  I have taken a lot of pride over the years in not living in a much bigger home and in a swankier place than modest Miami Springs.  My strategy has been to live generally at a standard of living below our income, leaving room for important exceptions, such as private higher education for my children, reduction and avoidance of debt, release of Carol's time to parent rather than to "work outside the home."  However, I don't think we could have been more comfortable and happy in a house twice the size of the one we have or in a neighborhood with more expensive houses.  It really wasn't much of a sacrifice at all.  To the contrary.

But live in a slum?  For the sake of a younger brother so he could go to school?  As I think about it, I might do that for my brother or sister or my children or someone in the extended family.

There is a problem with that question, however.  It won't stay put.  It begs, at least for a Jesus follower, other questions:  Who is my brother?  What if his need is not only education but medical attention, food, or shelter?  What then?  Are the answers to those questions different, that is easier, if I am 66 instead of 36 or is there really no difference at all?

There is a two-part interview of the author.  The first part is here and the second here.

Intellectuals and Race is at Amazon here.

I particularly liked Sowell's discussion of David Hume and the Scots, which is held in the context of a larger discussion about the dogma of "multiculturalism" and how it holds people back.  (This is in the second half of the interview):

"AmSpec: Let’s talk about the example of David Hume and the Scots and the path they followed.

"Sowell: The role Hume played was one diametrically opposed by that played by most intellectuals as regards ethnic groups that are lagging behind. He wanted the Scots to master the English language. And that’s what they did. There were places all over Scotland that were giving lessons in English. The Scots learned that and it greatly expanded their cultural universe. I don’t know if there were any books in Gaelic in Scotland, and you were unlikely to learn chemistry or anything like that in Gaelic. The Scots came out of nowhere. They were very backward at one point. But from the middle of the 18th century to the middle of the 19th century many of the leading British intellectuals came from Scottish ancestry, including John Stuart Mill and Adam Smith."
Posted by Paul Stokes at 3/30/2013 05:49:00 AM No comments:

Email ThisBlogThis!Share to TwitterShare to FacebookShare to Pinterest
Labels: Books

While the United States wrangles over immigration policy, Brazil has already made up its mind about immigrants. It wants more — as many as 6 million more.

“In a globalized world, we need not only the flow of goods and services but also the flow of minds,’’ said Brazil’s Secretary of Strategic Affairs Ricardo Paes de Barros. “We’re not after population; we’re after talent and human capital. By opening society, we can accelerate the development process.”

-from "Brazil is in the market for immigrants" in today's Miami Herald.

Compare the World Magazine article in its February issue, "Friend or foe," which shows the link between some of those opposed to immigration reform and their promotion of abortion on demand.  There is a sinister consistency with that opposition: cut-off the flow of minds into our country from any source, whether from the womb or from other countries.
Posted by Paul Stokes at 3/26/2013 06:30:00 PM No comments: 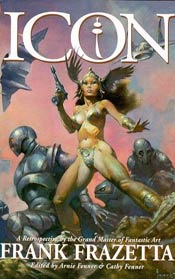 I read all the Edgar Rice Burroughs paperbacks that the Miami Springs library had when I was at the threshold of adolescence.  That interest had nothing to do with the Mr. Frazetta's cover art.  Nothing.
Posted by Paul Stokes at 3/26/2013 11:13:00 AM No comments:

Rest and Nutrition. What a Concept.

[New Philadelphia Eagles Coach Chip] Kelly is not coy about embracing science, as evidenced by the hiring of a sports-science coordinator. There are two specific areas that Kelly has addressed: sleep and nutrition. He said an elite athlete requires 10 to 12 hours of sleep. He believes there's a best physiological time to practice, but he still needs to figure out the logistics for the Eagles. He also pays attention to what his players eat and when.

"Everybody has a dining hall, and they're not eating Tastykakes and Chickie's and Pete's fries every night," Kelly said. "When you get to this level you are always talking about nutrition and their diet and things like that. Some guys do it, and some guys leave the building and go to McDonald's.

"[The question is,] did you get the right guy who is going to buy into what you're doing?"

The WSJ today reports that Scholastic Corp, will have a wider fiscal third quarter loss than expected.  The primary reason, according to the article, is the fall in sales of the Hunger Games trilogy, which Scholastic owns.  But

Scholastic also said it was stung by delays in educational-product purchases as school districts turn more to training and digital investments.

We upgraded the workstations at our office last week, and included in that upgrade are dual monitors for each station.  (A few of us had them already.)  This greatly facilitates our digital document production and research.  We expect to move or renovate our offices soon and hope to convert a great deal of our paper files to digital as we do so and not to retain future paper documents as they (decreasingly?) come in the front door.  This may be old hat to most business by now.  However, remember that we are lawyers and lawyers are deadly about innovation.

There have been battles between the FL legislature and our court system about funding the bureaucracies in each county known as "the Clerk's office."  There were serious state employee lay-offs following the Great Recession and lots of complaining from court staff and delays is the local "Clerk's office."  But now the court system is well into email court filing, digital record retention, and the use of the internet for all sorts of functions.  Would that system have moved in this direction without the recession?

I bought a new book on Amazon the other day, Steve Piefer's A Dream So Big.  The spread between the Prime hardback cost and the cost of the Kindle edition is only about $2.  I used to prefer the hardbacks, but now I am evenly divided over the issue.  For a book like this one, I would have bought the Kindle edition.  (What stopped me from getting the Kindle edition is that for the second time my cheap Kindle broke down.  Next stop, I think, is the smaller iPad.  Carol has made great use of her iPad.)

A big box of paper documents just came into my office, documents that I must review today.  My knee-jerk reaction is, "I don't want to see this box cluttering up my office and my file cabinets.  Put them in digital format.  Give me a reader that works."

I trust someone is working on a profoundly robust back-up system.  We have what we have, but the economy-wide race to digital worries me (and I'm sure a lot of other people) about the national interest in this respect.

Thirty-one years ago, when my dad reached age 70, he bought an IBM PC for his home office.  A new insurance product, adjustable life, had arrived on the market, and one needed a computer to understand and sell it.  (The insurance companies developed that product in response to the economic recession in the late 70s and the rampant inflation that followed it.)  He didn't hesitate to adopt both the tool and the product.  (He continued working until congestive heart failure finally retired him about age 80.) 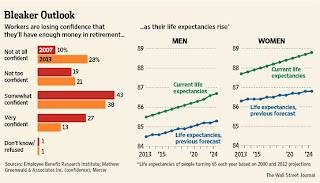 From "Workers Saving Too Little to Retire" in today's WSJ.

"Miami is the Center of the Universe"

Mary sent me Siddhartha Mukherjee's The Emperor of All Maladies: A Biography of Cancer, New York Times Bestseller, Winner of the Publitzer Prize, etc. and etc.  I am on page 169 of its 571 pages, and I can confidently state that the book and its author richly deserve such recognition.  As a survivor of Non-Hodgkin's lymphoma, diagnosed nearly 20 years ago, I can also say that my family and I lived part of that biography within a community of others with the same diagnosis and with their loved ones.  About half of us with that diagnosis survived.

George P. Canellos, MD, shows up several times in the bio.  After my oncologist delivered his diagnosis and recommended chemotherapy ("CHOP"), we asked him for a reference to another physician for a second opinion.  He suggested Dr. Canellos at Dana-Farber Cancer Institute in Boston.  Dr. Canellos would see us, so we made the appointment, sent some records on ahead, and made a one day trip, up and back.

Dr. Canellos was warm and encouraging, he approved the treatment, and said I would live to be an old man.  (Working on it.)  Until I started reading this book, I had only a dim idea of what American medicine (and heroic cancer patients and their families) had to go through for him to arrive at such a prognosis.
Posted by Paul Stokes at 3/05/2013 07:59:00 AM 2 comments: