Years ago, I discovered Abebooks.com, a site that aggregates the inventories of used book sellers (hereinafter "Abe").  When I would discover an interesting book title, I would first go to Amazon and read the reviews.  If that step further interested me, then I would go to Abe and compare the title's availability and price.  Often I would buy the book on Abe, if a used one would suit.  I got a better deal in terms of price, of course.  But, in the process,  I nicked the monolithic surface of Amazon, a tiny nick, of course, but a nick.

Several years ago, however, someone told me that Amazon acquired Amazon in 2008.  (So much for our antitrust laws.)  My nick, then, was reduced to whatever profit Amazon made on Abe's aggregation service because I settled for a used edition and not a new one.  (Of course, Amazon now prominently offers used prices on its website.)

When Abe lists a used book for sale, however, it shows not only the availability and price of the title, but also the vendor among the used book sellers whom Abe aggregates.  One may, then, go directly to the source and nick the Goliath with respect to the tiny price-profit  that I would otherwise deliver by using Abe.

Yet the problem with Amazon is not only its price power over the book market, new and used, but also its exercise of that power in an attempt to "cancel" a title.  That is, if the title is "controversial" in a way that Amazon dislikes, then it will not carry the title.  Amazon will censor the book.

An example of that practice is the title When Harry Became Sally, Responding to the Transgender  Movement (Ryan T. Anderson, 2018).  Recently, I have become particularly interested in the Transgender movement, and decided to read that book.

I first looked on Amazon, and was not surprised that it still does not carry the title, new or used..

Then, I looked at Abe.  It did not appear there either.  The cancellation of the title appears to have extended to Amazon's control over Abe's aggregation part of the used book world.

However, by the time I started looking for a used copy of the forbidden title, thanks to Abe I had a list of favorite used book vendors who have an independent on-line presence.  I went to one of them. Voila! There was the book, and I ordered it.

When I was a young associate at S&T in the 1970s, the firm had a single office location, like most other law offices in Miami at the time. We were in the Dupont Building on the corner of Flagler Street and NE 2d Avenue.  We then numbered about 22 lawyers.  The firm had several briefcases that the lawyers could use, first come, first served, for us to carry lawbooks, exhibits, notes and other papers west down Flagler Street to the Dade County Courthouse for a hearing or a trial.  This was well before the days of things on wheels with pull-up/put-down handles.  These were manly, black, box-like cases, made of tough thick leather, sewn together with thick thread.  They had a thick, comfortable, leather handle on the top side and gold fasteners that snapped open and shut with authority.  On top of each case, the vendor had stamped in gold leaf  “Smathers & Thompson” (on the first line) and “Miami, Florida” (on the second).  The cases were very expensive to buy.  But they were generous in size and very useful. 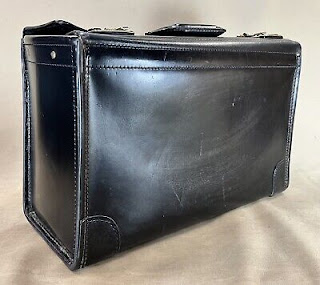 The lawyer carried such a brief case, maybe two of them, one in each hand, like a knight with his shield and spear, through crowds of civilians on the sidewalk, as he walked the quarter mile west to the courthouse. The suit and tie indicated to all of Miami that you were a lawyer.  But those brief cases shouted, "Litigator on the way to court!” - a well-prepared trial lawyer.

The firm had a closet where those cases were supposed to live.  It was too expensive to buy one for each lawyer, I was instructed, and the firm certainly would not for a green associate. But the closet was always empty when I was getting ready to go to court. The fact was, there were never enough of those brief cases to meet the demand. Lawyers who managed to locate a firm brief case and went to court would walk back down to the Dupont Building after the event, making it safely back to friendly territory,  totally fixed on sharing the court’s ruling with the people in the firm who wanted to know, and  calling the client with the result.  As to the brief case or cases those lawyers would usually throw them into a corner of their office and often did not unpack them until days later.  Meanwhile, I am looking for one of those cases, anxious about my upcoming event, trying to keep my presentation in my head, seeking a case for the pile on my desk of materials, specially selected materials, that I intended to take to court,  But there would be no brief case in the closet.

So, I would start down the hallway, looking for one, keeping an eye on the clock and beginning to seethe and often to sweat.  I would stick my head in an office and ask the lawyer if he had a brief case, if the lawyer was at his post.  If not, I would make a quick search of that office.  If I found a case, I would unload it and take the thing back to my office, letting that lawyer’s secretary know what I had taken and telling her I would bring it back.  That was the routine for all the lawyers there, and the secretary would not bat an eyelash.

I finally got tired of all that.  I also got tired of asking the officer manager to buy more of the cases.  I found out where she bought them, and bought one for myself, as expensive as those things were and as frugal as we were at home.  It got around the office that I had my own briefcase – it was news, really.  And I was hardly going to keep it in the empty closet no one used.  So, other lawyers would come in and borrow mine. Fair enough. No problem. (Unless I had a hearing scheduled that day.)  One afternoon the officer manager came into my office to borrow my new case.  She started to pick it up, but stopped in mid-motion.  “This has your name on it!  Not the firm’s!”  You better believe it, I said.  And I let her take it, of course.