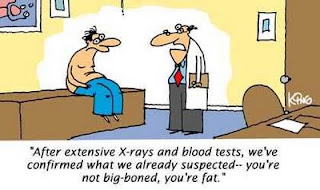 2500 years ago, Hippocrates, the "Father of Medicine", said to his students, "Let thy food be thy medicine and thy medicine be thy food". Moses Maimonides, the great 12th century physician, repeated the Hippocratic statement when he said, "No illness which can be treated by diet should be treated by any other means".

A friend of mine, years younger than I, who recently had heart surgery because of blocked blood vessals, will rely on drugs to prevent the re-accumulation of plaque rather than change her diet.

A consequence of the inevitable decline in the quality and extent of healthcare in this country, whether the decline arises from nationalization or the failure to reform the situation we have now, will be that people will re-examine the way they eat and live, they will change their behaviors, and learn to avoid disease that was always preventable. The people who do not will simply die earlier than they would have otherwise.

The cartoon above strikes very close to home. I had always considered my dear father, who died of heart disease, a "big man" - in the sense of being "big boned." I never thought of myself that way; my mother told me that her maternal grandfather (family name Jordan) was a small man, and I thought that my build may have reflected his build. But as my dad lost weight in the years before his death, his physique began to look more and more like mine, until it was mine. He was just (and I hate this word to describe such a wonderful man) "fat." He was not big boned at all. He simply "carried it well," kept his Florsheim shoes shined and wore Hickey-Freeman business suits. He always looked good to me. But he died of his good looks.
Posted by Paul Stokes at 12/10/2009 08:09:00 AM