So, it has been awhile since I posted anything. I decided that it was time, both because it has been so long and because I have some new things that I have enjoyed SO much and which have had a significant impact on me in the past several months.

Anyone out there ever hear of LuLuLemon? This is an athletic clothing line that makes very expensive and high quality gear. In the past year and a half, I have treated myself to several of their items. I don't usually spend so much on myself. I rarely ever buy myself anything really. Since I am having to replace my children's entire wardrobes twice a year as they grow and as the seasons change, I get to the point where I hate to spend any more money on clothes at all. However, I have discovered that I am more likely to run when I am comfortable in my gear and when I don't have to think about it once I am running. I originally switched from shorts to skirts because of those two things. (And, since I switched to skirts I have not ever run in shorts again...not even once--and it has been about 3 years on that particular front).

Anyway, I have discovered when running that cotton shirts get heavy and hot and chafe. I have also discovered that shirts that are tighter through the body tend to ride up when I run (an extremely annoying event which requires my attention and energy to fix several times throughout my run when I feel like I do not have that extra energy to spare). The easiest fix for this would be to switch to running in merely a sports bra (which more than half of the women at the Trail do), but I am simply NOT into baring my midriff for all the world to see. Enter LuLuLemon and some of their tops designed for dance and yoga: they may not have been intended for running, but it doesn't matter. They are the perfect option for me. Their power dance tank top is tight through the bust offering extra support where it counts, and it is loose and blousy and extremely light beneath the empire waistline offering coverage which stays in place and yet feels almost non-existent. In the picture I am wearing their "Let It Loose" tank, which looks quite different, but serves the same purposes.

I have also found that my one running skirt from them is my favorite. It has a back pocket large enough to hold my phone. It also has two places in the waistband that I often use to hold an energy gel and a key to my car. Also, the way they have designed the under-shorts is great. The legs actually stay in place and don't slide up my legs as I run. The name of this skirt is their "Speed Skirt" (I think).

I cannot tell you how wonderful it is to run and just enjoy the run-- to run and not be distracted by your clothes because they are too hot, too heavy, or simply won't stay in place. Plus, I must admit that it is so fun to run in clothes that are also lovely and feminine.

For some inexplicable reason, when I was younger I associated being feminine with being weak. I wanted to be a tomboy so that I would not be tainted by this weakness. Now that I am older and maybe a tiny bit wiser, I have realized that feminine does not equal weak. It is a different strength. It is a supple strength, a graceful strength. And, as silly as this may sound, when I run in my LuLuLemon gear, I feel unapologetically feminine AND strong. 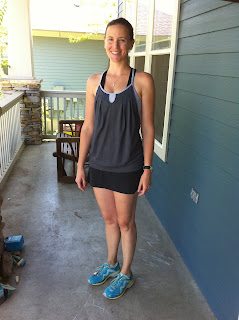 Now, onto Karhu shoes (as if this post isn't long enough already!) My sister-in-law, Mary, and I recently both went to Luke's Locker here in Austin. We both walked out with the exact same new running shoes by a company in Finland called Karhu (the Finnish word for "bear"). These shoes are designed with a fulcrum or lever-type function in mind. The hope is that when you put your foot down the shoe will quickly take that downward action and transition it forward into horizontal motion. It is supposed to help reduce the up and down motions and make your running more efficient. I LOVE these shoes. When I finally get into that zone where I am running and relaxed, I can literally feel the difference this makes in my stride. I can feel my feet moving in a more horizontal motion forward. I also find that my legs have been less tired running in these shoes. When I do begin to get tired, I find that if I can just pick my foot up and step through to put it down again that the shoe feels like it does much of the work to roll my foot from heel to midfoot to forefoot and on again. So, I concentrate on just putting my foot down again and the shoe rolls me on through to the next step. I do not know if Mary's experience has been the same. Her running form is significantly different from mine. She already tends to land on the middle or the fore part of her feet when she runs, so I do not know if she experiences the levering action at all. I don't land hard on my heels when I run, but just enough that I do experience the fulcrum at work. So, if you land on your heel at all, check these out. You may find that they help keep you moving forward.

If you are interested in checking these shirts out, I must tell you that there is good news and bad news. Both the shirts I mention have been sold out online and are no longer listed. However, you may be able to find them on ebay (for twice the price...ouch). Or, you can just wait a while and check again. They rotate through their styles and colors often and usually introduce new things every 45 days. Who knows? Their next line-up may be even better.
Posted by Kellsey at 7/24/2011 07:14:00 AM

No weak women among our kith and kin. Thus, the subtitle.

Thanks for this. Looking forward to seeing you soon!

Indeed, I am quite enjoying the karhu running shoes, too. As you sort of guessed, Kells, I haven't found they've much altered my stride, but they fit my stride quite well! I only wish I they could run again with you guys on the town lake trail!