What Does Leonard Say? Well, He Won't be Saying Anymore. 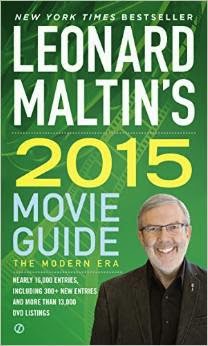 Around our house for as long as I can remember, there was "Leonard."  By that I mean a Leonard Maltin Movie Guide was always somewhere within 15 feet or so of the TV, because we love to watch movies.  Whenever someone in the family mentioned a movie title or tripped over something that looked like a movie while channel surfing, someone else would ask, "What does Leonard say?"  It didn't hurt that the Miami Herald reviewers seemed never to meet a decent movie that they liked - unless it also promoted an item on the Herald cultural or political agenda.  But we would have latched onto Leonard anyway, buying a new edition about every two years or so.  In fact, the time is ripe for a new one, because the one on hand right now is the 2012 edition.

But Leonard won't be sayin' anymore.  The 2015 guide, CNN reports, will be his last:

"I saw it coming a couple years ago," said Maltin, 63.  "There were pretty consistent strong sales for many, many years, and that started to change.  It came as a kind of a jolt."

Leonard points to the internet as the villain here.  With all due respect to the great man, however, he seems to me simply to be quitting.  Why not completely morph online?  (The CNN article states that he will remain online as a sort of blog on Indiewire.) The web would seem a logical place to move the whole enterprise, especially in light of the sheer volume of material out there - which several years ago required him to divide his treasure trove of reviews between the guide-proper and something called Leonard Maltin's Classic Movie Guide.  (And a web edition doesn't have to allow access without charge.) The guide already has a Kindle edition, for not much less than Amazon's print book - isn't there enough profit in that to keep the thing going?

Family, the 2015 Guide is on the Christmas list - and maybe the Classic Movie Guide too.  Leonard will continue to speak around our house.