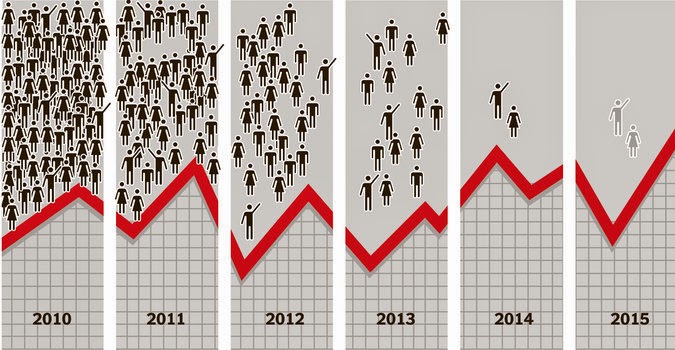 This graphic is from the Sunday Business section of the March 15, 2015, issue of the NY Times, a column by Jeff Sommer entitled How Many Mutual Funds Routinely Rout the Market? Zero. The graphic shows the number of active investment managers who beat the market in 2010.  Then it follows that cohort for the next five years.  As a member of the cohort fails to beat the market in subsequent years, it drops of the graphic.  By 2014, only two are left.  By 2015, those two, however, are not looking like they will survive the cut.  So it looks like none will be left.

A client of mine brought a hard copy of the article to our office yesterday for separate conferences we had set up with advisers from Fidelity and Vanguard, respectively.  The client had been considering whether to move from an "active" manager of the very large portfolio for which the client is responsible to a low-cost index approach.  (The client had also brought in a hard copy of another NYT column by Mr. Sommer, this one entitled Measure for Measure, Index Funds Rule.)

The client decided to fire the active manager, a trust company, tentatively giving about half of it to Vanguard and half to Fidelity.

The Vanguard representative made some points that were new and striking to me.  One is that Vanguard has under management over three trillion dollars of assets.  The economy of scale that Vanguard introduces with such a staggering amount has to be matchless, at least with respect to help that can be accessed by retail investors.

Another point that that Vanguard rep made is the following, a point the Vanguard makes on its website:

At Vanguard, there is no third party. The company is owned by its funds, which in turn are owned by their shareholders—including you, if you're a Vanguard investor.  In other words, Vanguard is structured as a "mutual" mutual fund company. It's the only firm in the industry that works this way. This unique structure aligns our interests with those of our clients and provides benefits to investors worldwide.

A third point he made is that, with respect to its actively managed funds, the management firms that Vanguard employs are third parties.  The client was not interested in "active" management, but I think it is remarkable that, although Vanguard offers actively managed funds, it does not share in the compensation of the subject investment managers.  In fact, it uses its scale to lower the cost of those managers, thus lowering the hurdle that such managers must clear in order to beat the pertinent benchmark or index.

Email ThisBlogThis!Share to TwitterShare to FacebookShare to Pinterest
Labels: Investing