Saturday, I attended a talk by Raquel Roque at the Miami Springs branch of the Miami Public Library. 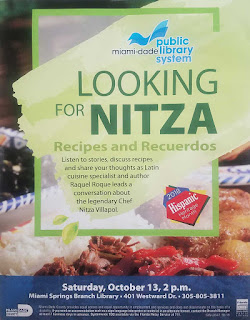 Raquel's "Downtown Book Center" was a favorite place of mine during the decades that I officed in Downtown Miami.  What a sad day it was for me (and no doubt many others) when she closed the retail part of that business, mortally wounded as retail bookselling was by Amazon and a fickle public. (The main part of  her business was international wholesale book distribution, which apparently thrives to this day.).  The link says that she closed the store in 2011.  So, I was five more years in Downtown after it closed, bereft of that place of escape from the stress of the practice.  (There was also a "Downtown Camera," another place for my therapeutic afternoon walks, and La Epoca, a department store that, like Raquel's business, had phoenix-like arisen in Miami from Havana, brought over by the generation ahead of us in the 60's and continued by the children. (Now all of those places are gone.)

The talk Raquel shared (and the food that she brought) was about Cuban cuisine, and its debt to Nitza Villapol.  It proved to be a controversial subject with some of  the 15 or so people in attendance.  (All but two of  whom appeared to be Cuban-exile children, now in their middle age, and a couple of grown-up grandchildren of those who came here in the 1960s.) Nitza had a TV show in Havana, and she hung in there through the revolution, teaching viewers how to modify traditional dishes to take into account the food shortages and rationing.  I learned, among other things, that a canned meat similar to Spam became a staple, and may have achieved a sort of comfort food position among the people who stayed behind.  (There was no canned meat in the delicacies Raquel brought with her.  They were delicious.)

There was a sort of triumphalist tone among those in the audience who were 60's exiles, something like "Our families escaped the Revolution, made it here to Miami, we succeeded to the extent that we now run Miami-Dade [a point that even Raquel made in an inoffensive way]; those left behind, well, are suspect at best, including but not limited to Nitza."  (The Atlantic magazine surely didn't help this view of the lady, when it published in article in 2016 entitled "The Revolutionary Chef of Havana.")

So, the matter of the Revolution remains a very sore point, and it didn't take Raquel's visit to Miami Springs to make me aware of it.  The Revolution is a deep, deep injury, without doubt, a healing one in some respects, but an ongoing one.  Of course, I have seen that injury up close for the decades since then, and I understand it.  I just didn't expect to see it going to a talk about recipes.  In one respect, it was an encouraging thing to see, because people are remembering tyranny, remembering it at a time when our culture appears in some ways and as a matter of policy intent on forgetting what happened in the past.  For all is new, we are being taught, the past is not relevant, and history is over.  The exile community, at least those attending Raquel's event, don't buy that.
Posted by Paul Stokes at 10/15/2018 08:10:00 AM