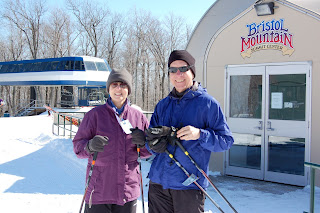 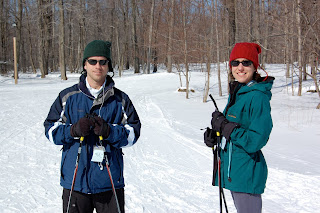 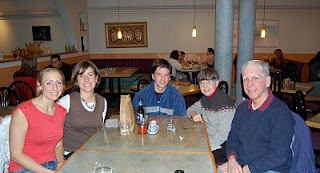 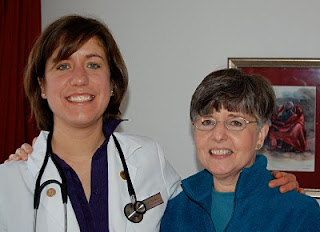 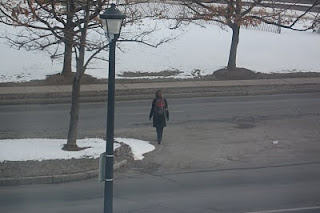 Carol and I worked on President's Day last week, so we could take a three-day weekend to Rochester, beginning just this past Saturday, to see Mary. This was a rare interval in her grueling medical school program, the most recent academic unit's exam having been last Monday and the next unit's exam several weeks from now. So she could spare us a Sunday, so off we went Saturday morning, headed to Philadelphia on USAir to change planes to Rochester and get there mid-afternoon. Walter was coming from Austin too, a super bonus, and we planned to do some cross-country skiing at a resort about 30 miles south of Rochester and near the town of Bristol.

The plane flights up were troublesome. I got bumped in Philly because USAir had overbooked the flight, but Carol went on. There were no other flights to Rochester that day. However, a USAir flight to Buffalo was boarding about two gates down the concourse, and USAir put another bumped passenger, a younger lady, and me on it. She told me that she was calling her husband to drive from Rochester to pick her up, and they would be happy to take me with them. So I arrived only a little more than 2 hours after Carol's plane arrived. (The drive from Buffalo to Rochester was a pleasure. The husband was a researcher at UR, and the young lady was a PhD who was staying at home taking care of their 4 year old, who came over with his dad. This young couple had met in college and were active in IV both at college and grad school. They are active in a Christian Reformed Church in Rochester.)

Walter had much more difficulty than I had with his connections, and finally arrived not in Rochester but in also Buffalo. So, after Mary gave us a tour of the hospital and med school (I'll post more on that later), back we went to Buffalo and picked Walter up about 6:30PM. But as long as we were all finally together, it didn't much matter, although I wish Walter had been spared the difficult time he had getting from Austin to Rochester that day. It was a consolation to have a fine supper in Rochester at a cozy table at Mediterranean restaurant on Monroe Street called Aladdin's. The food was very reasonably priced and very, very good.

Finally at Mary's house together, we settled down, Carol and I on the air mattress and Walter curled up in a sleeping bag, and had a good night's sleep.

Where Saturday was overcast and gray, Sunday morning was bright, clear, full of sunshine, with a beautiful winter blue sky. The day just begged us to come out and play. So down to the Bristol Mountain Ski resort we drove. Carol and I had a few trepidations about putting on skis again, but this time we would not do downhill ("Alpine") skiing but instead "Nordic" or Cross-Country. Friends of ours here who are from up north warned us about how strenuous it was, but we decided we would try it anyway, and, of course, Mary and Walter were more than game.

We had a wonderful time, and it was well within our physical capabilities. The resort had a terrific teacher who held a one-hour class for Nordic beginners, and he led us through the basics. The cross-country trails had been "groomed," so that made it much easier for us too.

We skied until about mid-afternoon, and by that time Carol and I were pretty tired, although we simply rejoiced at the beauty of the day, the woods covered with snow, and the time with Mary and Walter. And we did pretty well with the skis, and would be ready to do it again.

We came back to Rochester simply famished. Mary called her great friend Liz and we all went out to a Thai restaurant for dinner. The food was delicious there too, and just what we needed to fill us back up.

This morning, however, came all to soon. We had a good oatmeal breakfast, but Mary was soon ready to go school. She put on her white coat for a picture with Carol, and then it was good-bye. I took a photo of her out the window of her upstairs apartment, as she was crossing the street in front of her house to go up to the entrance to the hospital. Walter took us right to the airport, but would spend a little more time with Mary today before beginning his air journey home. We made our connections and arrived in Miami on time, already missing our loved ones, the one in Rochester, the eight in Austin. But so happy to have seen Mary and Walter this weekend.
Posted by Paul Stokes at 2/22/2010 05:44:00 PM