A Few More Miles to go Before I Sleep, God Willing 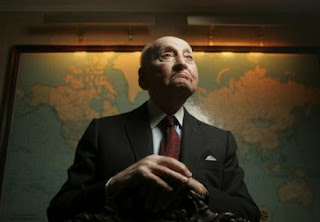 In the class I teach each year at the UM Law School in its Masters of Laws in Estate Planning program, I recently met a student who was not all that younger than I, a man who, after a varied and interesting business career, decided to go to law school five years ago. He told me about being inspired to go back to law school by the then "oldest lawyer in Massachusetts."

I searched for such a lawyer, and found his obit. His name was Reuben Landau. He died in late 2007 at the age of 103.

(I note that he changed his diet after having a heart attack while he was in his fifties.)

UPDATE: As I think about this gentleman, I also note that a son of his was in his firm. What joy that must have been each day for him to come to the office and work with his son. I stayed away from encouraging my children to go into the legal profession. I didn't discourage them, but I wanted to stay out of the way of the calls that God might offer them. Part of my reluctance, though, was that I found the practice to be so difficult, and I'm sure I let that show at home. Particularly difficult was the period during which I was a partner in the Miami office of an international law firm located in New York City. The boys were in their teen years at that time. When that firm closed their Miami office and pushed me out on the street, I began to discover how much fun it was to be a lawyer. By then Macon and Walter were out of the nest. Mary, however, gave law school a bit of a look. At least she seemed to enjoy wearing the "Chicago Law" sweat shirt I brought back from a reunion years ago.
Posted by Paul Stokes at 5/13/2010 08:14:00 AM