"She Needs Him to Talk to Her - Conversation" 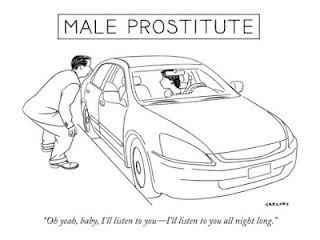 In the classic marriage book, His Needs Her Needs: Building an Affair-Proof Marriage, Willard F. Harley, Jr., identifies conversation as one of the five basic needs of the wife.  That need unfilled, the relationship is at serious risk.

I thought of Dr. Harley's book when I saw this cartoon recently on the eminent website known as theChive.  (I'm sure that's what the editors of theChive, "Probably the Best Site in the World", thought as well, when they first saw it.)  theChive borrowed it, I imagine, from the Condé Nast Collection website.

The artist is Alex Gregory.  Here's his short bio on the Conde Nast site:

Alex Gregory is a husband, a father, and a writer for television in Los Angeles. He has written for "The Late Show with David Letterman," "Frasier," and "King of the Hill." He was nominated for a Writers Guild Award for best writing for television animation. Gregory has contributed to The New Yorker since 1999 and is a rare cartoonist who creates his cartoons entirely on a computer.
Posted by Paul Stokes at 9/04/2012 09:46:00 PM