Acts Have Consequences OR the Market Will Not Be Denied 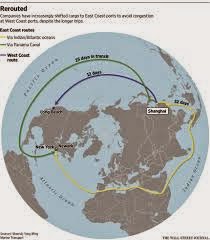 In today's WSJ, an article entitled "Ports Gridlock Reshapes the Supply Chain" reports that the

labor dispute that caused months of gridlock at West Coast ports may be over, but the disruption is expected to redraw the trade routes that goods take to reach U.S. factories and store shelves.

The article has a great graphic that shows the three major routes of shipping from Shanghai to the US, the shortest (12 days) east across the Pacific to Long Beach, CA;  another east across the Pacific, but this one through the Panama Canal and up to New York (25 days); and the third west from Shanghai, by way of the Indian Ocean, the Suez Canal, the Med, and the Atlantic to NY (32 days).

The disruption by that awful West Coast strike will take 6 months to resolve from the end of the strike, according to the article.  Furthermore, 1/3 of the shipping to the West Coast is "discretionary" anyway, that is, it can move on the alternate routes to the East Coast about as cheaply, when US ground transportation is taken into account.  Finally, the disruption tends to get the market to rethink how the other 2/3s of the goods should be moved more efficiently.  In a way, the strike may be a good thing for the economy as a whole, but not all that great for CA.