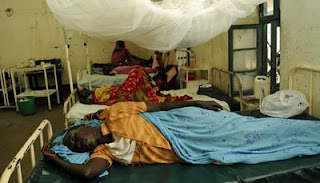 Our friend Juliet Lahmeyer brought Carol a copy of the February 2009 Samaritan's Purse Update. The Update is on the 'net here. An excerpt:

For young physicians just out of residency who feel called to medical missions, our Post-Residency Program provides the opportunity to serve for two years in a hospital overseas. Through this program, we have physicians and their families serving in over a dozen developing countries across Africa, Asia, and Latin America.

Drs. Garry and Leann Finke are serving at Kijabe Hospital in Kenya, where the couple continually witnesses God’s healing hand at work. Leann especially remembers a 13-year-old boy named Kelvin who spent a month in the hospital after being run over by a car. He almost died, but the Lord answered the prayers of the Christian staff at the hospital.

(I'm pretty sure that the photo is not of a ward at the Kijabe Hospital. For one thing, the wards we saw there were much neater. For another, the hospital is above the malaria line, so there would be no need for the mosquito netting. From the article, it would appear that the photo is of a ward in a missionary hospital in South Sudan.)

But the picture of the docs with the child that you link to is at Kijabe. I definitely recognize that. (And I recognize the doctors, too.)