Make that the Dove Avenue Plantation and "Shamba" 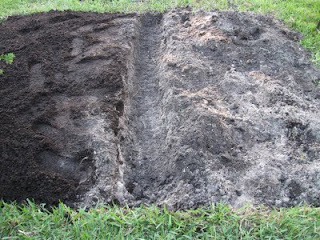 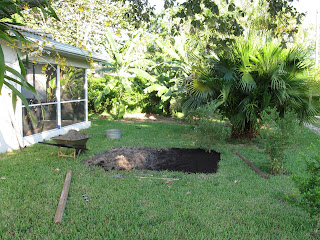 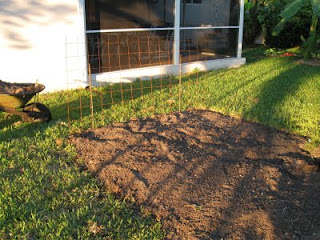 This weekend I worked on clearing a spot in the backyard for the veggie garden. First I dug up a rough rectangle of about 6 X 5, taking out the firmly rooted St. Augustine grass. Then I prepared the bed using the (ahem) double-dig method. This sophisticated approach to family farming in Miami Springs involves: (1) covering the bed with an inch or so of compost, peat moss, and Lowe's magic veggie soil formula, called something like "jungle blend" and (2) "double-digging" trenches that will result in the soil being loosened down to 18 inches or so, with the top 8 to ten inches being mixed up with the compost, peat moss, and jungle-blend layer. Along the north edge of the bed, I drove two re-bar stakes and tied a piece of what looks like fencing (but is used to reinforce concrete when you pour it on a flat surface) to make a trellis for the tomato vines.

The first photo shows what the bed looked like when I was half-way through the double dig. The second photo is of the bed from a different angle at about the same stage. The darker half is the half still covered with the blend of compost, peat, and jungle blend. The lighter half is where that layer has been mixed in with soil that was already there. With the double-dig, you work your self down the length of the bed by digging a trench with a D-handled flat spade, then using a D-handled spading fork on the bottom of the trench to loosen the soil further, and then digging another trench right next to the first one, turning the spoil from the new trench into the first one. And so on. (Got it?) The third photo shows the bed all ready for the starts, with the trellis in place.

I will transfer the starts this coming week, and probably bury a couple of sweet potatoes and seed some carrots and radishes.