Don at Our Wedding 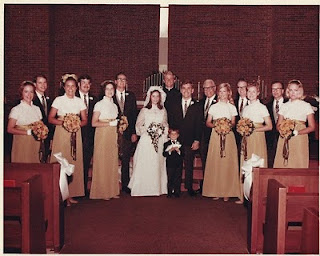 My Uncle Don was a groomsman at my wedding in 1970. In the first photo, he is the groomsman at the far right. (To his right is my cousin Kenneth. Then my father, who was best man, and then me. The minister was my friend and roommate my senior year at Duke, Doug Tanner, who went on to Duke Divinity School after we graduated. The other groomsmen are, continuing to the left, Ashley James, Al Kirshen, a friend of mine from law school, and Tommy Watts, who grew up with me in Miami Springs. The bridesmaids from right to left are Margaret Drury, a friend of Carol's from Greensboro, Janice Horner, Carol's roommate at Duke, Debbie Williams, Carol's suite mate at Duke, Carol's sister, Mary Ann James, who was matron of honor, Gail Millians, who lived across the street from Carol in Greensboro, and my sister, Julia. The ring bearer is Jeff James, Mary Ann's son.) 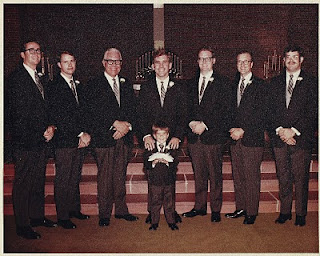 The next photo shows Don second from the right, between Al and Ken.

The final photo doesn't have Don in it, but it's one of my two favorites from the wedding, so I thought I would post it. 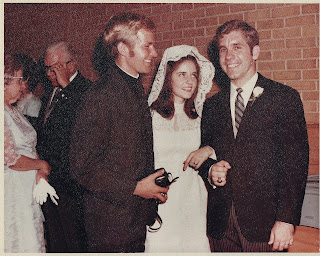 The first wedding in my memory was that of Don and Ann in 1952 at the First Baptist Church of East Point, Georgia, the middle class suburb of Atlanta where my grandfather had his funeral home and, right next door to the funeral home, his own home. It was a grand wedding, and I remember the excitement and joy even today. I was six years old then. There is a photo among the pictures in Ann and Don's wedding album which has me in it, looking up at Ann in her beautiful wedding dress. I had about the same expression on my face as the one in the third photo. Both Ann and Carol were stunning brides, and both Don and I very blessed young men.
Posted by Paul Stokes at 1/11/2010 08:49:00 PM

Whatever happened to Tommy?

I have completely lost touch with him. He became a dentist and moved to a town in New England to practice, is the last I knew.