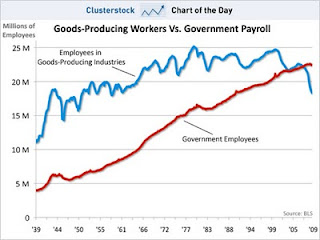 Each work day morning I usually commute to downtown on MetroRail. Along the way, there is a stop at the Tri-Rail station, where commuters from Broward County board our train. Tri-Rail is a heavily subsidized, public commuter train company that rents track time for its cars from CSX. Tri-Rail's route runs parallel to I-95, beginning in north Palm Beach County and running south to its termination at a station near MIA airport. Its train stops at the MetroRail transfer point where its commuters join my ride.

A very substantial number of the people who get on board at the Tri-Rail station are government workers and the government they mostly work for is our county government, known as Metro-Dade. These people live in Broward County, home of late 20th century "white-flight," as to which sort of people I always thought "Good riddance." But here they are back, populating our local bureaucracy, living off our taxes, getting guaranteed pensions, health care, working their tough 9 to 5 jobs, and enjoying all the legal holidays and generous vacation benefits. Plus they are as noisy as they can be when they get on board. (Don't they have books to read? Or a newspaper?)

MetroRail, of course, is also a heavily subsidized, public transportation entity, except it runs on its own tracks, the construction of which was mostly financed with federal taxes back in the 20th Century. (President Reagan ridiculed the expenditures on MetroRail, famously saying that the government could have bought every one in Miami-Dade a Cadillac and saved money, instead of subsidizing the construction of MetroRail.)

Several years ago the people of Miami-Dade County in a referendum passed a one-half cent additional sales tax. We were promised that the funds would help with needed capital improvements and address deferred maintenance for MetroRail. The Miami Herald could not stop writing about what a wonderful thing such a tax would be. All the politicians supported it. It passed. But the funds were not used for capital improvements for MetroRail. Instead, they were used to raise salaries of the government workers who are employed by MetroRail. Even the Herald had to admit that Metro-Dade broke its promises and we were had.

All of this rant is preamble to the chart I am posting. It's a great chart, because it shows how bad the situation has become. For another unhappy chart, go to Instapundit. (I do recognize that the chart I posted does not purport to show all private-sector workers vs. government workers. It shows all "goods-producing" workers. There are, of course, workers in the private service sector. Lawyers, for example. [Pause for derisive laughter.] If service workers were added to the chart, then we would not see the lines cross so soon.)

Of course, we need some government workers, and many of them are conscientious and competent people. (Some of my best friends are . . . etc.) But they will be hurt along with the rest of us when our society collapses because of radical government expansion.
Posted by Paul Stokes at 1/06/2010 04:58:00 PM