At the Folkstone Inn and Bryson City 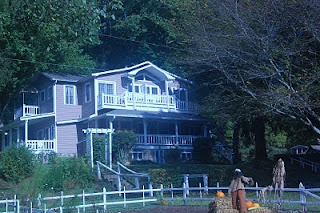 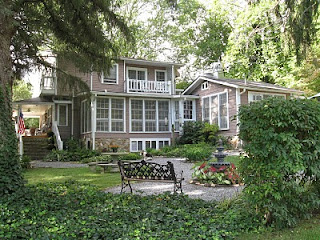 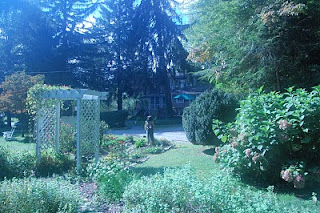 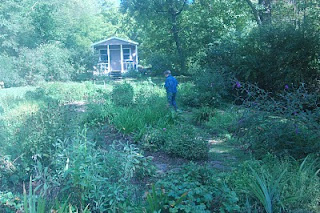 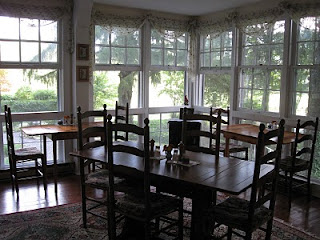 What happened to that weekend, the one where we celebrated our 40th? Up we went to Western N. Carolina, home of so many warm memories, but the weekend came and went so fast, and we were back to work so intensely, that I haven't had time to sort out the photos and the memories. Until today. Here are some shots of the Folkestone Inn near Bryson City, where we stayed. It's a bed and breakfast right near the Deep Creek entrance to the Great Smokey Mountain National Park.

The first photo shows the front of the Inn on the brilliant Sunday morning that followed a couple of rainy days. It is taken from the SE and the morning sun washes over the front of the Inn. The second shows the north side of the inn, and our second floor balcony is marked by the white railing. I took the third photo, also looking back to the north side of the Inn. In the foreground is the entrance to the herb garden, and that's where I'm standing. I turn around and take the fourth photo, and there is Carol.

Part of the Inn's breakfast comes from its gardens. Those were tasty breakfasts, but heavy on the bacon, the eggs, and the cheese. We could find our way to a vegan meal, and mostly were successful, but we ate several dishes with cheese. Of course they were tasty, but we weren't used to full-fat dairy, and our stomachs complained. And there were some very sweet, too sweet dishes too.

The breakfasts were in a sunlit, pleasant little dining room. In fact, the entire Inn and its grounds were carefully, even lovingly made-over from the farm-house it must have been originally. We enjoyed our stay there and felt very welcome.

Bryson City itself was another matter. The restaurants seemed run down (probably the economy) and the food pedestrian. The only bright spot was a Mexican restaurant in a strip mall on the edge of town: Guayabitos, relatively big, bustling, full of energy, totally staffed by Mexicans, and fun to watch the native mountain folks dig into burritos, tacos, and swigging Mexican beer. The food wasn't exactly Austin quality, but it was not bad, especially against the other offerings in Bryson. But, of course, Bryson wasn't the focus of our visit. More on our weekend in later posts.
Posted by Paul Stokes at 10/10/2010 05:19:00 PM