On Presidents' Day the office was closed, so Carol and I decided to go to Crandon Park, a Miami-Dade County Park on Key Biscayne, and cook breakfast. Key Biscayne is one of the islands of a chain that hangs from a point about a mile east of Downtown Miami and dangles into the Florida Straits. Key Biscayne, then, is one of the Florida Keys and can be reached via a beautiful causeway that begins not far from our office. Crandon Park is on a beach that stretches about 3 miles along the Atlantic. I've been going there since I was about Aidan's age. It's a very popular place for those few of us in South Florida who don't have our own condo on the beach.

Our plan was to take our camp stove and the fixin's for bacon and pancakes.

We arrived there about 8AM, and there were few human beings to be seen. As we walked toward the beach from the parking lot and approached the picnic area, we saw hundreds of birds. 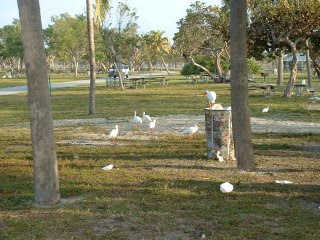 They were already having breakfast, feasting on the left overs of the mobs of beachgoers who had covered the place the day before. The weather was beautiful, about 70 degrees, and the morning was bright. 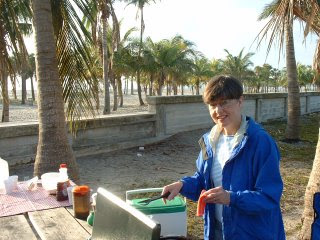 I kept a sharp eye out for Seminole scouting parties. 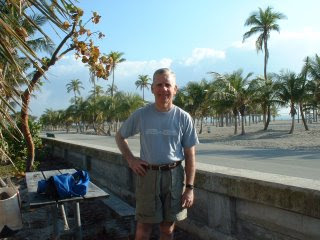 About that time, the park work crew began its own clean up efforts. They had cleverly waited while the birds did the first sweep of the place. The crew then followed in three phases: two guys with sacks and sharp sticks approached first, and they picked up stuff that didn't get into one of the many, many trash containers; then a fellow driving a big front-end loader followed, accompanied by two more foot-troops who dumped the trash containers into the loader bucket, which, when filled, was emptied into a large dump truck that waited along a narrow strip of pavement that bisected the picnic area; and then a solitary trash picker, with pointed stick and sack, came along to pick up any thing left behind.

I can tell you that after watching this, I was ravenous, and tore into the whole-wheat pancakes and turkey-bacon that Carol had prepared. Hmmm, turkey-bacon. I recalled that among the birds doing the clean-up I had seen several turkey-buzzards chewing away. Gave me a sort of warm feeling.

After breakfast we cleaned up and drove back to our office in Downtown Miami (that trip took 10 minutes). We worked until lunch time. Then we had another picnic right there in the kitchen, feasting on the bag lunches we had brought with us. Then we went home.