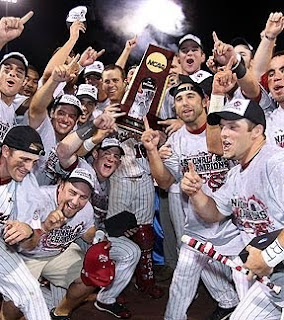 (The player at the middle-right with his cap on backwards is the cousin of Sandy, one of our paralegals.)

Sandy's cousin is Adrian Morales. He lives in Hialeah and graduated from Miami Springs Senior High. He has four brothers, all of whom play baseball. Adrian played for Miami-Dade College his first two years, and was drafted by the Astros with a really big bonus offered. He decided to go, instead, to Carolina, play there, graduate, then seek a direct draft into the majors rather than the farm system which the Astros offered. Smart guy.
Posted by Paul Stokes at 6/30/2010 11:03:00 AM

Finally! No more, "just wait til next year." So totally awesome.