For the President's Day weekend, Carol and I visited Mary in Rochester.

Carol and I flew from Ft. Lauderdale to Rochester to see Mary on Friday, February 18. We got up at 4:30AM, and left for the airport from the Springs about an hour later. We were booked through Atlanta on AirTran, where we changed planes. The weather was mostly clear and the flights smooth. (We found a Moe's in the Atlanta airport and had a fat vegan burrito.) We arrived in Rochester about 3 PM to a sparkling afternoon, full of sunshine and in the fifties, with a good bit of the snow of the last several weeks (months?) having melted. Mary picked us up.

At Mary's snug apartment, she plunged back into preparation for an oral exam set for 8:30AM Saturday morning. Carol went to work cleaning the kitchen (it wasn't so bad) and finishing her window curtain project (commenced 18 months ago), I caught up on some reading I needed to do about the new tax laws. For dinner we went to "The Owl House," which is a frame house in the "Southwedge" neighborhood, near the city center. (The old houses of Rochester are beautiful. The Southwedge neighborhood reminded me a little of East Point when I was a little boy, that middle class suburb of Atlanta where my mother grew up and like Disneyworld to me (not that Disneyworld was around at the time). Rochester also reminds Carol and me of Winston-Salem, another very attractive smaller city, although Rochester is a good deal larger I think.) The menu had some wonderful vegan entrees, and we had a great dinner.

Back at Mary's again, she jumped back into her studies, and we to our projects. But about 10PM, I was toast. The lights were on, Mary and Carol were talking from time to time, but I had conked out on the double-wide air mattress in the tiny living room/dining room/study and woke up only once in the night, sleeping to 6:30AM. 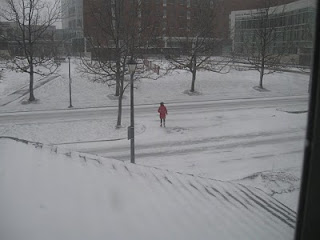 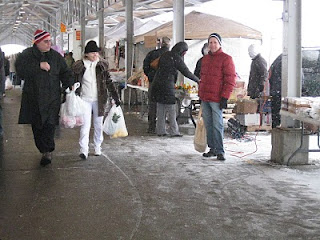 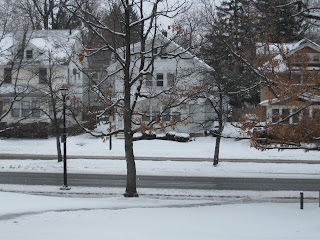 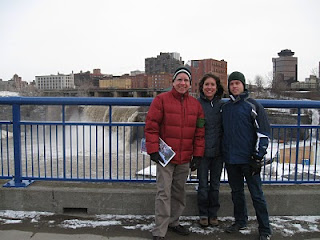 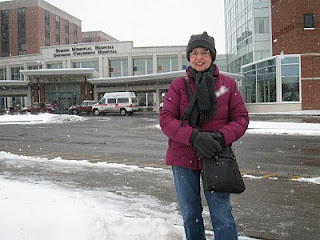 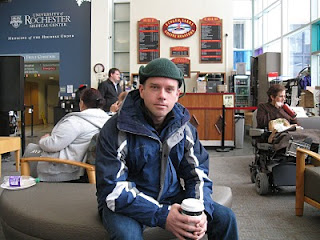 Saturday morning when I woke up, Mary was already through breakfast and deep in more study. Then she was off to her exam at 8:15 AM. I took a photo out the window of her going across the street.

So, then, Mary came home from her exam (it only took about 15 minutes following a week of study!), Carol and she made lists, and out into this weather we went, to go . . . shopping. The first stop was an outdoor farmer's market, called Public Market. Yes, I did say "outdoor," but in fairness I need to say that it has some indoor buildings as well. But there was serious selling going on outdoors, even with the wind whipping snow sideways. (See the second photo.) You have to ask, "What is wrong with these people." But as Mary is fond of saying in mock astonishment, "There's an entire country north of us," so I guess Canada makes it all right in Rochester to go to an open air market when it is in the 20s and the snow is falling sideways.

From there we went to a suburb called Pittsford, which Mary likens to Coral Gables (Her brain is frozen. Coral Gables was not the first thing I thought of - or even the last - as we made our way into the parking lot of the Pittsford shopping mall, following a snow plow hard at work.) The shopping center has a Stein Mart, Carol's all time favorite place to buy bargains, so we went there first. Next door to the Stein Mart was an outdoors shop (which is indoors) called Eastern Mountain Sports, where Mary bought some marked-down snow shoes, as they were having their Spring sale. (Really. These people are anticipating Spring! On the other hand, anticipating Spring might be the only thing that would get me through a winter like this.) Then we went to a really marvelous grocery store call Wegmans. Obviously, the Whole Foods guy must have passed through Rochester on the way to making a grocery store success, because Wegmans is amazing. Wegmans could very well make Rochester livable. We had lunch there. Yum. And they are very vegan friendly.

Meanwhile, Walter was driving up that day from the DC area to Syracuse with Pete, Mark and others from Davidson College days. (Pete and Mark stayed with us once at Spring holidays when Walter was an undergraduate.) The group as a whole planned to attend the Syracuse-Rutgers basketball game in the Carrier Dome (Walter says more people attend the basketball games there than the football), and then head east for ice fishing. But our plans were to pick Walter up in Syracuse after the game and then drive back to Rochester, despite the snow, the wind, and the severe weather alert.

The real reason for going to Syracuse, of course, was to visit the L.L. Bean Outlet store. We had first encountered this store on the way up from Bryn Mawr when we helped Mary move to Rochester. So we drove through the wintry weather, the forty mile an hour winds, and the snow flurries eastbound on I-90, "the tollway," and I marveled at how well the NY highway department kept the roads clear. We passed nearly a dozen snow plow like trucks on the way to Syracuse. Keeping in touch with Walter via text, whose party had arrived at the Carrier Dome, we drove by Syracuse proper to Fayetteville, a suburb, with the outlet store.

We spent probably an hour or more at the L.L. Bean store, and it wasn't all that big. But it seems to be a true outlet store, with quite a few items marked "returned" and other items that were more or less winter goods and were marked down, I guess, on that account. (As I indicated, everyone up here is looking forward to Springs
.) There were two racks of men's outdoor jackets that must have been a style that just didn't sell, but that looked to me like a great bargain for something like $24. I suppose, however, that it would have been very unlikely for any man to have reached that place in mid-February who didn't already have a winter jacket. I bought some slippers. Carol said that they were a real bargain, but I did the math on the plane tickets, the gas to get there, the risk to which we put our persons on I-90, and thought - silently - "oh, not so much."

The basketball game went into overtime (Syracuse finally won), and by that time we had finished with the L.L. Bean store and had taken refuge in a very comfortable, warm place in the tiny mall to which the store was attached. In touch with Walter via cell phone (as we had been of course all afternoon: none of this would have been possible without the technology), his compatriots agreed to meet us at a nearby Wegman's. Our plans had been to go from there to a Middle Eastern Restaurant in the same mall as the L.L. Bean, but we decided instead to eat at the Wegman's, our second time that day. (And, I must tell you, the food was great!)

Then it was back on I-90 and back to Rochester through the weather. The snow had pretty much stopped coming down, however, and the roads were clear. Again, we passed several snow plows brushing the snow off the highway that the still high wind kept blowing on the road from the drifts. After the 90 mile drive, we arrived back at Mary's apartment safely.

Sunday morning brought back a bright day full of sunshine, but very cold. After an oatmeal breakfast (or Musli, if you were Carol), with soy vanilla yogurt and a banana, we went to Mary’s church, a PCA start-up that meets in the gym of a Christian school.

The service had good music, mainly hymns but also a couple of contemporary songs that had hymn-like depth. The hymns included one I had never heard before, and I thought I had heard all of them – it was very good too. (Alas, the bulletin did not have the names of the hymns and songs.) They had a good ensemble: a keyboardist, who was the leader, two guitar players, three singers (the keyboardist also sang), and a violinist. They were young, except that one of the guitarists had a few years on him. (Yeah, us!)

The regular minister was away, and one of the staff, not quite a minister, gave the message. He made a lot of good points, a couple not so good, but it was a worthy first draft of a sermon. His text was 1 John 5 (“God is love.” How can you miss?) He also had an informal, easy style. We met some of Mary’s friends, two from the medical school, after the service, and that was a pleasure too.

For lunch we went to a Chipotle’s near Mary’s apartment, a new one. It gets a lot of business from the nearby hospital complex and is right across the street from one of the undergraduate dorms of the University of Rochester. Mary said that the college students can use their dining cards there, which I think is pretty enlightened.

After lunch, we went downtown to the "High Falls" neighborhood, set on the bluffs overlooking the Genesee River, right at the High Falls. The City of Rochester has an odd little museum that was quite interesting and informative. There we began to understand why Rochester during the 19th Century managed to be a hotbed of the entrepreneurial spirit - seeded by some great minds and powered by the falls. There is a wide pedestrian bridge over the river, where Carol took a photo of the rest of us, with the falls in the background. For a similar photo, go to Mary's blog here.

Later that afternoon we did a Home Depot and Bed Bath & Beyond run. The day was capped by a dinner at Alladin's downtown with Walter, Mary and 5 of her friends from the med school community (not all were med students). It was such a pleasure to share that meal with them.

Last day for Carol and me, and it had begun to snow again. It was a President's Day holiday but for Mary it was another school day. She was beginning a new unit on urology and, somehow, seemed less enthusiastic about it than the heart unit she had just completed. So, after breakfast, she went down the stairs, out the front door, walked through the snow, on foot (what a great story for her grandkids - sort of Lincolnesque) . . . across the street (she needs to leave that part out of the story) to the hospital/medical school complex. Meanwhile, Carol and I packed up and visited with Walter.

About mid-morning, we decided to venture across the street ourselves. I took a picture from the hospital side, back toward Mary's house. And then turned around to take another of Carol, with the main entrance of the hospital in the background.

Once inside, we set off to find the med school's great little bookstore and then go get a cup of coffee at the coffee shop in the lobby of the hospital. We got a little lost, but ran into Mary, who had a break during the intermission of the lecture. She helped us find the bookstore and went back to class. We had our coffee (see my photo of young Walter) and walked back across the street to her snug apartment. Mary came back for lunch, and then, after she left for school again, Walter drove us to the airport, which is only about 15 minutes away. We had a smooth ride back home, changing planes in Baltimore.

LOVE this post! So much fun! So many pictures of people that I love. Thanks!