Academics, Basketball, and Ancestry in the ACC 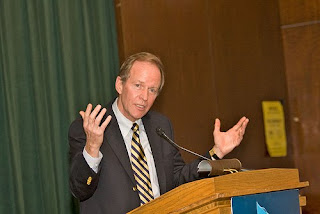 I talked to my friend and college roommate Doug Tanner this evening on the phone. He had this to say about Duke Basketball.

Saveral years ago, a sportswriter asked Coach K how much importance he assigned to academics for his basketball team at Duke.

Coach K said that he at least hoped his players would be able to spell his name by the time they graduated.

A young Piedmont State man interviewed for admission to Wake Forest. Asked by the Admissions Director whether he was a Baptist, he said no. "Well, what about your father?" No to that as well. "Your grandfather a Baptist?" No, sir, to that. "Then I'm afraid there is no place for you here."

Over to Duke the young man went. Because Duke is a Methodist school, the same sorts of questions were asked about Methodist Church membership: first of the young man, then of the young man's father and mother both (the mother included, as Methodists are more liberal along gender lines than Baptists) and then of his grandmothers and grandfathers. Still negative answers and the same result: no admission.

Then it was over to Raleigh and an interview with the NC State admissions office. This time the questions were whether the young man was a farmer: no. Whether his parents were farmers: no. Whether his grandparents: no to that as well. Then, "We can't admit you here, sir."

"Well, I'll be a son of a bitch!" the young man exclaimed.

"Oh," said the admissions officer, "Have you tried Chapel Hill?"

(That photo is a recent one of Doug. He was the minister who married Carol and me, and he is pictured here at our wedding nearly 41 years ago. He hasn't changed much! How does a man carry-on being so good looking? [Walter? Macon? Steven H? Cody?])
Posted by Paul Stokes at 4/06/2011 09:25:00 PM