A Walk to Beautiful. A Walk to Emaus. 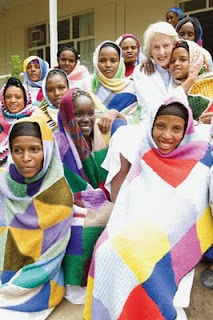 The most frequently watched video around our house is A Walk to Beautiful, a NOVA documentary about the work of the Addis Ababa Fistula Hospital in Ethiopia. The film tells the story of such a walk taken by three young women, virtual outcasts in their villages because of injury done them by a prolonged, obstructed labor. They walk to the hospital started by two Christian surgeons from Australia, Catherine Hamlin and her late husband, Reginald, and are healed.

The story that the film tells is completed in an article in the April 23 issue of World Magazine written by Emily Belz, entitled "Delivery from Shame." The article completes the story because the film is extremely light on the central fact that the hospital is a Christ centered mission. The article makes that fact very clear.

I thought this sidebar to the Belz article was quite interesting, especially for people who think that all medical advances are invented in the US:

A reliable surgery to repair fistula wasn't developed until the 19th century. Hamlin and her husband drew advice from an Egyptian doctor, Pasha Naguib Mahfouz, a Coptic Christian who was one of the pioneers of fistula repair in the first half of the 20th century and helped eradicate the condition in Egypt. He sent them drawings of his surgeries. The Hamlins wrote anyone around the world who had tried fistula surgeries to get their advice, and began developing their own techniques for the difficult operation.

The Hamlins had never seen a fistula until they arrived in Ethiopia. Reginald Hamlin performed his first attempted fistula repair on a 17-year-old whose husband had abandoned her, and he succeeded. The Hamlins were working under difficult circumstances: A blood bank, so vital for surgeries, was nowhere to be found when they arrived in Ethiopia in 1959. The refrigerator at the hospital where they first started usually had one or two pints of blood in it, according to Hamlin, and they had difficulty convincing suspicious staff and able patients to give blood. That's changed over the last 50 years.
Posted by Paul Stokes at 8/12/2011 06:26:00 AM