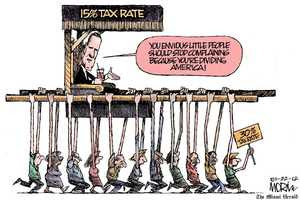 Mr. Romney said he makes most of his money from investments, not wages or salary. Thus his income is really taxed twice: once at the corporate tax rate of 35%, then again at a 15% tax rate when it is passed through to him as dividends or via capital gains from the sale of stock.

All income from businesses is eventually passed through to the owners, so to ignore business taxes creates a statistical illusion that makes it appear that the rich pay less than they really do. By this logic, if the corporate tax rate were raised to, say, 60% from today's 35% and the dividend and capital gains tax were cut to zero, it would appear that business owners were getting away with paying no federal tax at all.

This all-too-conveniently confuses the incidence of a tax with the burden of a tax. The marginal tax rate on every additional dollar of capital gains and dividend income from corporate profits can reach as high as 44.75% at the federal level (assuming a company pays the 35% top corporate rate), not 15%.

-from the WSJ via Best of the Web.

I worry that the American people don't understand this sort of thing, even though it's pretty basic stuff. I don't think Jim Morin, the gifted political cartoonist of the Herald, does. (I'm giving him the benefit of the good-faith doubt.)
Posted by Paul Stokes at 1/23/2012 09:35:00 AM