As to the problem, the government's response appears to be along the following lines, according to the Herald.

The recovery of crocs prompted the U.S. Fish and Wildlife Service to remove their “endangered’’ status in 2007 but they remain a “threatened” and federally protected species that scientists say still needs to expand back into historic range to assure long-term survival. So unlike when an alligator invades suburbia, state trappers typically won’t move a crocodile until a third nuisance call.

“That’s not a hard-and-fast rule,’’ said [Lindsey] Hord[, a bilogist in charge of the Florida Fish and Wildlife Conservation Commission's nuisance reptile program], "Realistically,  public safety is our absolute first priority but we have to recognize the need of the species.’’


While each case is different, he said, the message is to learn to safely live with them. 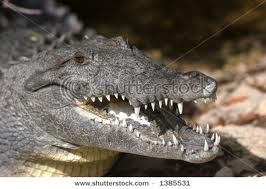 Email ThisBlogThis!Share to TwitterShare to FacebookShare to Pinterest
Labels: Your Government at Work