Alice is Running for Congress 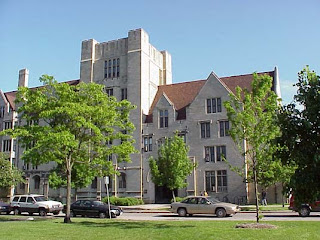 Carol and I married just before my third year of law school at the University of Chicago began. With a little help from my parents, we worked our way through that year by being dorm parents for the law school's first co-ed dorm, my running the coffee concession in the law school lounge, and Carol working as a ward clerk at the UC Hospital. Our living quarters were an apartment on the second floor of the venerable "Burton-Judson" dorms (pictured), the floor where the women had their rooms. Our apartment consisted of three adjoining rooms, one of them a spacious living room with a fire place. We had our meals at the dining hall of the dorm, although Carol did some cooking in a toaster oven, and we had a fridge.

Alice Kryzan was one of the women who lived on our floor, and was a first year law student that year. She's running for Congress this year, and it's her first time running for office. She called me yesterday, raising money for her campaign (she said that the professionals who are advising her told her to call everyone she knows.) We had a great conversation after 35 years. She married Bob Berger, who was also a first year law student that year. She'll win.
Posted by Paul Stokes at 6/21/2008 02:10:00 AM