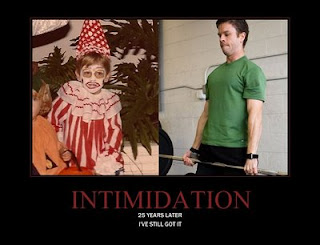 I don't think that you really need a title. the images speak for themselves.

Not sure what to do now that we've got these little girls, because I can't easily lock those up in a cabinet.

Possible title (verbose though it is)

"From Party Clown and Burger King Lady to Gov. of California".

I declare Ken the winner.

Walter is a beast!