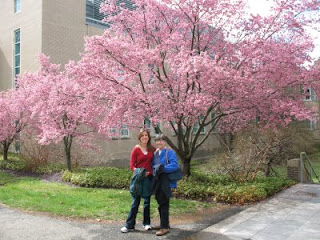 Friday morning Carol and I flew up to Philadelphia to visit Mary. After we landed, we took a train north from the airport into the city and the 30th Street Station. We transferred to a train that went west out of the city to Rosemont, and then walked through a driving rain to Mary's apartment building about two suburban blocks south of the station. (We had our umbrellas, so no real problem). We were there, snug in her apartment, when she came home from school about 2 PM. 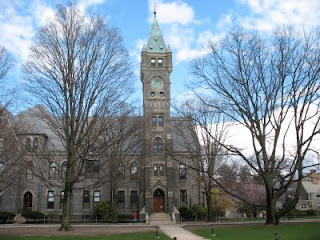 About the time we arrived at Mary's apartment building, the weather cleared and the sun came out. So after she came home, Mary drove us the two miles over to Bryn Mawr College, and gave us a tour of the science building, her real home-away-from home, and the rest of the lovely campus.

Spring was just at the threshold of bursting forth there, and several trees had already bloomed. The first photo is of Mary and Carol in front of one of these harbinger trees after we came out of the science building. The second photo is of Taylor Hall, one of the main buildings of the college.

The lawns, well watered from the rain and a deep green, the flower beds freshly mulched with the leaves of tulip and other bulbs popping up and soon to flower, and the old stone, neo-gothic buildings of the campus rising up from all this promise made a very pleasant sight. We walked by student guides and their charges, young women, apparently high school seniors, who seemed to be giving the place one last look before deciding whether to come next fall. The season favors a positive decision.

From there we drove a mile or less to Ardmore, another of the little towns that seem to overlap one another along the "Main Line," where there is some serious shopping available. As Carol and Mary enjoyed themselves (buying after all very little), I sat in a plaza surrounded by J. Crew, Talbot's, a vest pocket Macy's, and the like, watching a Robin for about 15 minutes look around another freshly mulched flower bed for a worm with no success.

The shoppers rejoined me, and we walked about a block to "Trader Joe's," a sort of toned down Whole Foods and a favorite grocery store of Mary. From there, we went around the corner to "the Farmer's Market," where we ended up buying supper on a take-out basis. This was an interesting place - the vendors inside the Farmer's Market manned 21st Century "stalls" or "stands" (which words do not come near to describing how classy these points of sale are). There was a Mennonite bakery, although we successfully resisted the temptation to load up, a wine vendor, an Asian food stand, where we bought some talapia and a tofu dish, an Italian stand, where we bought some potatoes (we were eating eclectic that night), and several other places that made us hungrier and hungrier. So with our haul we quickly went back to Mary's apartment, which was already redolent with some bread she had baked for our visit, and had supper. We topped it all off with a trip back across the street to a McDonald's for their 1$ caramel sundaes - a dessert tradition that we first adopted on our trips to Spain.

The next morning we were up fairly promptly, and Mary made her very strong, Kenya edition of cafe con leche for herself and me. She had thoughtfully bought Muesli for Carol's breakfast, and there was oatmeal and yogurt, all with bananas and blueberries and, of course, the homemade bread. Yum.

Then, as we had planned, we took off for the Valley Forge National Historic Park, which is part of the National Park Service. This, of course, is the site of the "encampment" of Washington's Continental Army which began in December 1777 and continued until the spring of 1778. It is a sprawling park, but has a good visitors center, and an exhibit where several very small log cabins have been built, replicating over 1000 of such shelters that the soldiers built for the winter. We learned that the winter, while cold - was moderate for Pennsylvania, and that the army, while tested during the winter, emerged transformed by the training they received from Von Stueben, fresh arms from France, and the encouraging news that France had come into the war on the side of the Colonials.

Two of the three park rangers who gave talks were very good, and one of them gave some interesting detail about how the cannon and muskets were used to devastating effect. I asked this gentleman for some recommendations on further reading about the Continental Army, and he suggested two books, Joseph Plumb Martin's A Narrative of a Revolutionary Soldier, and Charles Roster's, A Revolutionary People at War.

The third photo is of Mary and me in front of the visitor's center, and the fourth is of the National Memorial Arch that was dedicated in 1917, commemorating the "patience and fidelity" of the soldiers who wintered there in 1777-1778. 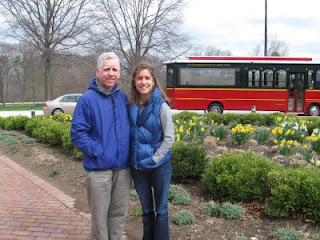 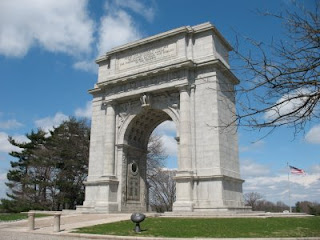 On the way back from Valley Forge, we made a quick stop at King of Prussia Mall (by then, we understood why there would be a place named "King of Prussia" in that locale, for he had been a friend to the Colonials), and then home to Mary's apartment to rest and to put the finishing touches on the plans for the evening. Those touches mainly involved Mary and Carol studying the guide books for a good place for dinner in the city, not too far from the Kimmel Center, where we had tickets that night to attend a concert of the Philadelphia Orchestra.

They came up with an Indian restaurant, Lovash, and it proved to have delicious food and was moderately priced. There were all sorts of off-beat shops and other restaurants in the Lovash neighborhood, and there were lots of people, from the plainly tourist to 1980s grunge types - it reminded me a bit of Ybor City in Tampa.

After that it was off to Verizon Hall at the Kimmel Center for the Performing Arts where the Philadelphia Orchestra performed under the direction that night of Andre Previn. Mary had asked me what we should expect to hear from the PO in relation to our friend the New World Symphony. I told her that we should be able to hear quite a difference, even though we enjoy the New World. Although we expected to hear something better, we were simply stunned at the quality of the orchestra, especially on the Mozart piano concerto. (Piano Concerto No. 24, K. 491 - click "System One," then scroll down to Piano Concertos)

Andre Previn, who turns 80 this year, seemed quite feeble as he approached the piano (for the Mozart) and then, after intermission, the podium for Strauss's Symphonia Domestica, but he carried it all off with strength and aplomb. We sat in the orchestra section, not that far from the stage, and you could see on the faces of the musicians how much they were enjoying Previn and how they connected with him. We all enjoyed it!

The next morning, we attended City Line Church, and heard a fine sermon on 2 Corin. 12:1-10, from the pastor, Steve Kim, and met some of Mary's friends who also attend there. For lunch, we went to a burrito fast food place and then back to the apartment to relax. At about 4 Mary walked us to the train station, and we back-tracked to the airport and then home by about 9:30PM Sunday night.
Posted by Paul Stokes at 4/06/2009 08:12:00 PM

Such a good weekend. You must come back for the Cezanne exhibit!