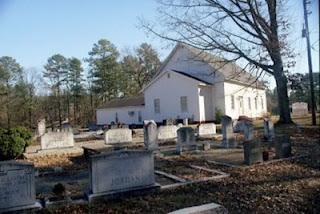 -from a Brief History of the Church.  (My bold.)

No minister in Gwinnett county (sic) is held in greater esteem than the Rev. J. T. Jordan, of Lilburn. He has given his life to the people among whom he was born and reared. He was born in this county in 1840, was educated in its common schools and received a hope in Jesus Christ in 1858 when 18 years of age.

He united with the church at Camp Creek in 1860, was ordained to the great work of the ministry in 1866, and was elected pastor of four churches during the same year. He has the extraordinary record of serving two of these churches from the year of his ordination in 1866 to the present time. To state it again, he has been pastor of two churches continuously from 1866 to date, a period of 44 years.

During his entire ministry, he has served eight churches as pastor and of these eight churches, he has served four at a time continuously from 1866 to the present. Perhaps no preacher in Georgia or the South has served so long and so well the people among whom he lived and labored.
- from Flanigan, J. C., Gwinnett Churches: A Complete History of Every Church in Gwinnett County, Georgia, with Short Biographical Sketches of its Ministers (1911), as quoted here.

It is interesting that Rev. Jordan is described to have "received a hope in Jesus Christ."

My mother told me about going to services at Camp Creek PB Church when she was a child, with her grandmother, "Granma Jordan" (pronounced "Jerden").  Granma was Mrs. Nancy R. Della Lanford Jordan, my great-grandmother.  Granma was very close to our family as I grew up and a very important figure in my mother's life.  Macon's middle name is Lanford, in honor  of her.