The Navy doesn't like to advertise this, but it is trying to fulfill its traditional global role with a fleet of 285 ships—the smallest it has been since before the First World War, even if modern warships are more capable than ever before. That number is likely to decline further under President Obama's proposed budgetary cuts. If you sleep better at night knowing that a powerful American Navy ensures the freedom of the seas in places like the Gulf, the time to start worrying about the Navy's future is now.

-from Brett Stephens' opinion piece in today's WSJ.  (About O'Brian's Master and Commander.) 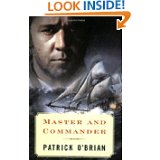 President Obama may bear some of the responsibility, but as someone who reads this stuff every day, the more likely culprits are the Pentagon, Congress and industry (the Iron Triangle evolution of Eisenhower's military-industrial complex).

everything has moved toward more expensive, ostensibly more capable platforms. we ended up with just over 100 F-22 air superiority fighters. the end number of F-35s we will see drops every day the program flounders.

there was some reaction against this trend to more, bigger and costlier as we nation-built in Afghanistan and Iraq, where we needed more troops and more systems with less capability (like small UAVs for intel and MRAPs to counter IEDs).

however, now there's major backlash. we failed (at least to some extent), so everyone hates nation-building and wants to go back to big systems again. this will be 'empowered' by the stated strategic shift to the Pacific to counter China.

the problem in the Navy was supposed to be addressed by the LCS -- more, cheaper ships. but, guess what happened? the development was mismanaged and they're over budget and very late.

this goal for the Navy is very worthwhile. but lots of almost intractable forces have been working against it. and we do need to save money. to me, the Obama Administration's plans for cuts are reasonable. but every Congressperson whose district/state is affected is screaming bloody murder.

how's that response? more than you bargained for ;-)