We Rest Our Case 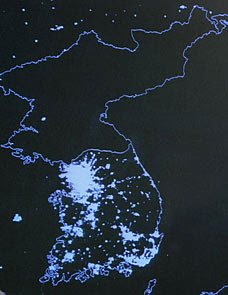 This satellite image of the Korean peninsula, taken after 9PM when North Korea goes dark to save power, is more than telling. The photo appears in an article in the Daily Mail, and quote's Defense Secretary Rumsfeld's comment about the photo:

It says it all. There's the south, the same people as the north, the same resources north and south, and the big difference is in the south it's a free political system and a free economic system.

"The people in the north are starving, their growth is stunted. It's a shame, a tragedy"


ADDENDUM: Thanks to Drudge for pointing to this article. I would also add to Secretary Rumsfeld's list of operative differences (free political system and free economic system) the fact that the number of Christians in South Korea is beyond a certain tipping point that facilitates, even enables, such freedoms.
Posted by Paul Stokes at 10/13/2006 06:46:00 AM