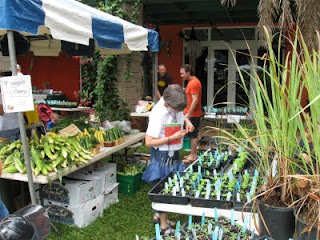 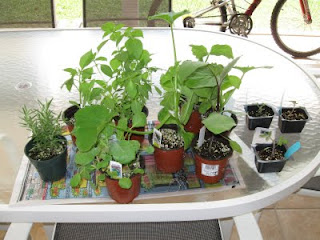 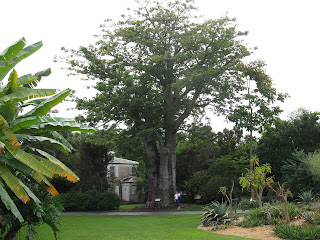 The official name of the event at Fairchild Gardens this weekend is "The Edible Garden Festival," and Carol and I were there yesterday when the Gardens opened. Fairchild Gardens is such a beautiful place, it should not take a festival for us to get there. But we did go to the festival, and it was not a disappointment.

There were some lectures, and we went to three of them. The first was by Ginny Stibolt, who has recently published The Sustainable Garden for Florida. She was very, very articulate and thoughtful, a good writer who gets her hands dirty in a very productive way. We bought her book and she autographed it.

Then Carolyn Coppolo spoke on Creative Container Gardening. This lady, who owns the Redland Herb Farm (scroll down) in South Dade, is a very funny and learned lady. She had a booth at the Festival and there Carol bought rosemary and basil plants.

Next Margie Pilarski told us about Growing Organic Heirloom Tomatoes. She owns Bee Heaven Farms in South Dade, and was just full of information on these kinds of tomatoes, over 160 varieties of which she has dealt with in just the last four years or so. At Margie's booth, we bought three tiny heirloom tomato plants, one a Black Zebra, another a Black Plum, and another a Lime Green Salad. I've posted a photo of Carol at Margie's booth. UPDATE: Bee Heaven Farms has a blog, too, which is as interesting as the website. Margie also started Redland Organics, and here is that organization's site.

From these booths and others, we also bought an egg-plant, cabbage, yellow squash, zucchini, red bell peppers and collards, bringing them all home with the intention of planting them in our backyard, west of the banana patch, and eating big this winter. I've posted a photo of our haul.

Fairchild is simply a stunning place. I can't close this post without a photo of its baobob tree, which Aidan refers to as a "billybob" tree, reflecting his Texas roots (so to speak). (That's Carol at the base of the tree. Click on the photo to get a better perspective on its immensity.)
Posted by Paul Stokes at 10/25/2009 01:24:00 PM