The Tide is Turning 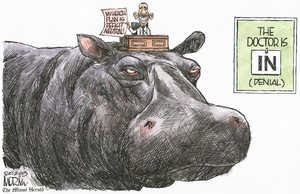 Jim Morin is the Pulitzer Prize winning political cartoonist for the Miami Herald. He is so well respected that he is on the Herald's left-leaning editorial board. He has a savage pen, usually directed at right-wing foibles. I would have thought that the Herald editorial board generally and Mr. Morin specifically would be a firm part of the President's base. But here is that pen directed at President Obama, and I must say I am quite surprised, even astonished. (Obama is holding up a sign that that says "My Health Plan is Deficit Neutral!")

But that's a risky pun, because "de" could be taken as a dialect for the word "the," as in "de Nile" for "the Nile." That has racial overtones, arguably. Furthermore, hippos are in Africa, and Obama's father is an African. Yet we all know that most criticism of the President is racially grounded. Not.
Posted by Paul Stokes at 10/02/2009 04:48:00 PM