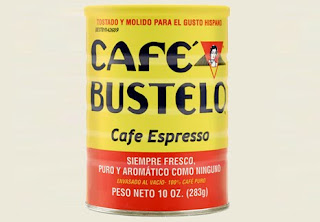 The Herald reports that the family that owns Cafe Bustelo and Cafe Pilon, Miami icons, is selling out to Smuckers.

Smucker said it plans to close the Miami production facility within the next three years and relocate all production to a New Orleans plant that will be handling roasting and production for all its coffee brands, which include Folgers and Dunkin’ Donuts. The publicly-traded company also plans to consolidate distribution and marketing operations.

Some employees are expected to remain in Miami to service restaurants and other food-service operators, said company spokeswoman Maribeth Badertscher. Employees not offered continued employment will receive severance packages, ranging from 12 weeks to one year.

So much for the sad employment picture in Miami-Dade. So much for community loyalty. So much for Dad's hard work. (Dad is gone. The "family" consists of his three sons.)

This deserves a Despair poster or t-shirt of some sort. How about this

The image is the can, as indicated, but the label is retouched to say "CAFE BETRAYAL"

The legend: "Selling out Calle Ocho for the big bucks."

I hated all the things I had toiled for under the sun, because I must leave them to the one who comes after me. And who knows whether that person will be wise or foolish? Yet they will have control over all the fruit of my toil into which I have poured my effort and skill under the sun. This too is meaningless. - Ecc 2:18-19

Amen to that, Rick.