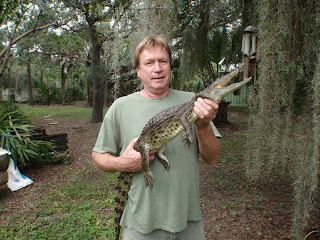 The four-foot one in the photo was caught in the Fruit and Spice Park in South Dade, for heaven's sake.  Read the Herald article in this morning's edition.  Here's the Wiki article on the Nile Crocodile.

How much nastier is this African cousin of our American croc?

The two species with the most well-known and documented reputation for preying on humans are the Nile crocodile and saltwater crocodile. Each year, hundreds of deadly attacks are attributed to the Nile crocodile in sub-Saharan Africa. On New Guinea, Borneo and the Solomon Islands attacks by saltwater crocodiles often occur. The mugger crocodile is also very dangerous to humans, killing many people in India every year. The American crocodile, while generally considered to be less aggressive, does occasionally kill humans and a handful of fatalities are reported and confirmed every year in Central America and southern Mexico. The black caiman is also responsible for several recorded human fatalities every year within the Amazon basin and the surrounding regions. The American alligator is responsible for human fatalities, with most occurring in Florida.