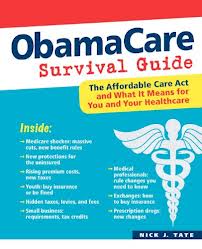 Having had it so good growing up in the post-war boom times (Viet-Nam for some, but certainly not all of us, being the exception), we've been looking forward to our pensions (if we've had government jobs for governments still able to pay them), Social Security, and, finally, Medicare.  Medicare is a biggie, and whatever gaps there might be in it would be filled up by our buying supplemental insurance, something called "Medicare Advantage."  None of that is going to happen, however, as we may have counted upon it happening.

According to the recently published, ObamaCare Survival Guide: the Affordable Care Act and What it Means for You and Your Healthcare, by Nick J. Tate:
On page 48 of Tate's book, he writes this:

The biggest losers under ObamaCare are Medicare recipients.  Senior citizens are thrown a bone with the closure of the "donut hole" in the program's prescription drug plan, but that will not offset the hundreds of billions of dollars in budget cuts over the next decade.  And once the Independent Payment Advisory Board (IPAB) beings to operate, additional cuts seem likely.

A healthy diet, exercise, and other good health habits, then, are really not optional.  If one has been thinking that several visits a month to this health provider or that will help one pass the time during one's golden retirement years, then it is high time to change that thinking.   We have a Brave New World here.  Acts have consequences after all.