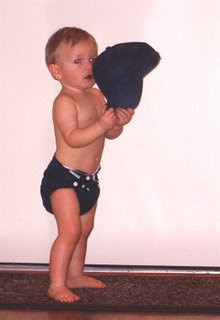 Friday was Aidan's 18 month check-up. He weighed 22 lbs 5 ozs and is 31 1/2 inches tall. This puts him in the 10th percentile for weight and the 25th for height. He is a little guy, but I am not concerned. (apparently, at 18 months I weighed all of 20 lbs 3 ozs and was also 31 1/2 inches tall...so my guess is that Aidan is just taking after me). Anyway, the doctor wants me to return in 2 to 3 months to see if he is still losing weight. We will, but I don't expect him to (keep losing weight, that is). Anyways, at this point he has 4 molars that are all breaking through at once, which seems to be causing him some pain and may be affecting his appetite. The poor guy had to get two shots and it seemed to really "fuss him out" for the rest of the day.

He is beginning to pick up lots of new words and continues to learn new signs for words he can't articulate yet. So, even though he can't say "elephant", he can stick his arm out like an elephant's truck and go "wooo-oooohh!" (his attempt to make an elephant's trumpeting sound). My particular new favorite thing is when you ask him what a bear says. He clenches his fists and raises them (with bent elbows) to either side and really clenches all the muscles in his body as he goes "grrrrrrrrrrr!" VERY CUTE.

He is not in the least interested in stacking his blocks, but he is obsessed with cars, trucks, tractors, airplanes, and really anything with wheels. He likes to make his cars and trucks go all over the couches, the floor, the stools, the armchairs, the stairs...you get the idea. He also loves to unlatch and relatch buckles, and unplug and re-plug small little things like his monitor or his sound machine (don't worry, we don't let him play with real outlets). He also seems to read books in "jags". He will get stuck on a favorite book for a week and every time you put him to bed, you have to read that book first, and sometimes last as well. Currently, he is stuck on Sandra Boynton's Christmas book called "Bob the Reindeer and other Christmas Stories". When you sit down to read he immediately goes, "Bob? Bob? Bob?" and points until you get it and read it. Before that, he was stuck on a book with about 100 little flaps you can lift about life in Bethlehem around the time Jesus was born.

Anyways, he is really beginning to be a little boy. When I ask him if he wants something, he will think about it and either say "no...na, na, no" and shake his head, or else he'll laugh and point to what he wants, impatient for you to give it to him.

Here's some cuter pics of the little guy. The top one is of him in his little fuzzi bunz--some cloth pocket diapers that are so fantastic! I LOVE THEM. I love them more than gdiapers (for those of you who got to read that post).

In fact, just as a follow-up: while I love gdiapers, it appears that Aidan does not. Something in the back of them itches his back and causes him to scratch so hard he gets little scratch scabs on his back. I think it's the tag or something, but I haven't figured it out because he is mainly in his fuzzi bunz. I have also discovered that he wets too much overnight to use either fuzzi bunz (even with a doubler) or the gdiapers. So, we're still using Huggies for those overnights. (that little tid-bit is for the readers who I know are out there who are actually interested in Aidan's diapers....if you're not interested, then thanks for reading anyways!) ;-)

hope you enjoyed the update! 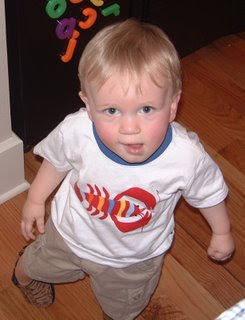