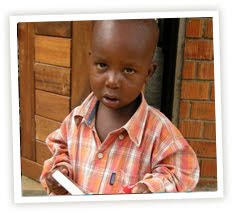 Yesterday we spoke on the phone with Mary about her visit to the children's hospital in Mbale, about an hour's drive from where she is staying this summer near Jinja. (She and another med student from Rochester are doing a malaria study near Jinja with an organization called Soft Power Health.)

The Mbale hospital is run by Cure International. According to the website:

The CURE Children's Hospital of Uganda (CCHU) in Mbale Uganda, is a 30 bed teaching hospital that specializes in treating the neurosurgical needs of children with an emphasis on hydrocephalus, neural tube defects, spina bifida, epilepsy and brain tumors. CCHU also maintains a large outpatient clinic and operates monthly mobile clinics in remote regions. CCHU was opened in 2000 and serves children with physical disabilities regardless of their ethnic background, religious affiliation or ability to pay.

CCHU serves approximately 7,000 children each year with a wide range of medical services. Approximately 900 surgeries are performed each year. The hospital has 30 in-patient beds and 10 intensive care beds and maintains a busy out-patient clinic. The hospital operates mobile medical clinics that find hundreds of children who are suffering from disabilities in remote areas and whenever possible, transports the children back to the hospital for care.
I'm looking forward to a write-up from Mary on her visit, but she doesn't have ready access to the Internet to do so on her blog. So for now I will do my best to pass on what she told us.

She knew about Cure International because the organization has a hospital in Kjabe, next to the AIM hospital. She visited those hospitals during her two years teaching at RVA, taking students there each week to visit the patients. When she arrived in Uganda in June, she asked Sarah, one of her missionary friends who lives in Kampala, whether Cure has a hospital in Uganda, and Sarah told her about the one in Mbale. Mary emailed the director to ask whether she and her friend from med school might be able to visit. She added that she had been diagnosed with hydrocephalus as a child and has a Ventriculoperitoneal shunt ("VP shunt").

The director responded immediately, issued an invitation, and asked Mary if she would talk to the mothers of the little patients there about her diagnosis and treatment, because he knew it would be a great encouragement. (This is the same reaction Dr. Bransford and his staff had at the AIM Kjabi hospital, when they learned that Mary is a VP shunt veteran.) So yesterday, Mary and her friend made the trip to Mbale.

She said that the hospital is a fine facility, unusually squared-away, with up to date equipment, clean and well-staffed. Mary said that CURE is definitely a worthy place for contributions.

She met one of the neurosurgeons who was just getting ready for surgery, and he invited her and her friend to scrub and watch. (Later, one of the staff said that this surgeon never allowed visiting med students to watch, so he was apparently pretty impressed with Mary.) He warned her that she might find the surgery a little uncomfortable to view, but Mary said she would have no problem with it, and she didn't.

The surgery involved a two-month old hydrocephalic baby, which the doctor said was old for the VP shunt procedure. The operating room was well equipped, even to the CT scanning apparatus that guided the surgery. (Mary said that ours is a great country, that its people would supply a machine like that to a hospital in a little town in Uganda.) Before the surgery commenced, the surgeon and the other operating team members prayed together. (We might pray for that baby too, even now.)

After the surgery, Mary, through a translator, spoke to a group of mothers that the hospital staff had gathered for her, and the staff made a video of her talk to show other mothers later.

This is an awesome story and it's great to read about how CURE is having a life changing impact on the people of Uganda and all who visit, like Mary. Did you ever receive a write up from her on her visit? Hopefully so! :)

Thanks for spreading the word about CURE and for your prayers! :)