The Radfords of Kitale. On Sunday, our last day in Kenya, Mary said good-bye to us at Mayfield, the AIM guest house in Nairobi, in the late afternoon. Our flight to London did not leave until 11:30 PM that night, but Mary and her friends needed to return to Kijabe while there was still daylight. We would stay at the guest house, have supper there, and then one of the guest house employees would drive us to the airport. As Mayfield is a transit point for missionaries, we had the opportunity to meet several of them, and among them were Nathan and Carrie Radford, who have a prison ministry in Kitale, a town near the border with Uganda. 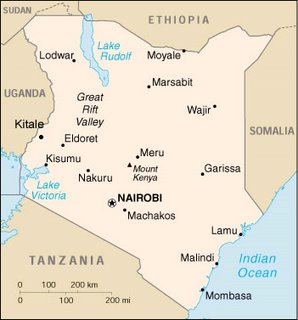 Nathan is a tall, fine looking young man in his late twenties or early thirties. He told us that the town of Kitale is "only" 8 hours away from Nairobi by bus, and it's a fine service with new buses. This is a good thing, because the last ten miles or so on the road to Kitale is so rough that automobiles can no longer negotiate it. But the bus can, and Nate found that to be entirely satisfactory.

Nate has had typhoid fever once, and malaria several times. The prison in which he leads a Bible study and discipleship class (using publications from the Navigators) is so filthy that when he comes home for lunch, he has to completely shower and change his clothes. If he merely washes up, he will inevitably get sick.

He carried on this ministry as a bachelor for several years, but prayed for a wife, and met Carrie back in the states through a Christian dating service. They started a correspondence and, eventually, his parents, missionaries in Kenya, and her parents, retired missionaries back in the States, met one another. Then Nathan came to Carrie's town and met her. They courted and married, and she came back to Kitale with him and she does prison ministry among the smaller population of women in the Kitale prison.

He has been doing this work in Kitale for several years, and the prison officials have learned to trust Nathan, and now they allow him to carry on an extensive ministry. He has obtained permission to build a chapel on the prison premises that he can also use as a classroom, and has raised sufficient funds from supporters back in the states to buy the materials. The prisoners themselves have volunteered to help him build it.

Nathan said that when one is sentenced in Kenya to prison, his family abandons him and will have nothing further to do with him. What desperate, forsaken men are these! And what sort of ministry is this? A ministry to forgotten men, who are outcasts and have no apparent future. This is the work to which God has called Nathan.

Nathan has a page on the "Baptist Faith Missions" website, the sending organization. His monthly prayer letters are there, as is a photo of him and Carrie. I've enjoyed reading his prayer letters.
Posted by Paul Stokes at 12/18/2006 08:25:00 PM