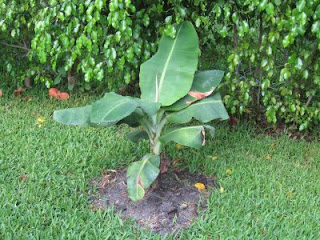 I purchased the banana plant pictured from Lowe's. The plant had a Lowe's tag, and it said that the banana variety is "Cavendish," also known, according to the tag, as Musa acuminata 'Cavandish'. The tag had other helpful information, and it gave a web address for "care instructions." There is more on the webpage for this plant than care instructions. For example,

The tag didn't say to which subgroup the banana plant we brought home belongs. My guess is that it is a "Grand Naine," which I understand to be the kind we buy at Publix that are grown by Chiquita. But we'll see.
Posted by Paul Stokes at 5/23/2009 07:14:00 PM

Email ThisBlogThis!Share to TwitterShare to FacebookShare to Pinterest
Labels: Bananas

that ought to take care of 1/3 of your daily banana consumption.