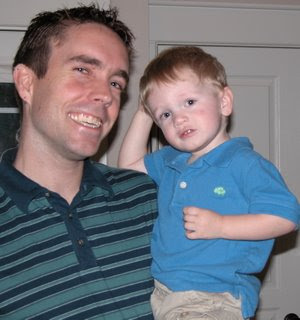 Well, it was over a week ago, but I wanted to be sure and post a pic from Aidan's first day of Preschool. The first day he did well, but had just started to cry from sheer exhaustion about 5 minutes before I picked him up. The second day he had been asleep for a half an hour by the time I got there and didn't want to budge--even though he was surrounded by lots of little toddlers having a grand ol' time. The third day of preschool (which was this Tuesday) he was awake and very happy when I picked him up. The teachers said they had no idea he could talk so much. I am guessing he finally decided he was comfortable with them and went to town trying to talk about every little thing like he usually does at home. I was excited that he was still awake when I got there. Putting him down for a nap once we got home was much easier that day.

Today, however, the little one has been in his crib for 45 minutes and is still awake. He was falling asleep until I put him in the bed. Then, he woke up and has been moving around and talking and doing his little "pre-nap moan" ever since. Man, I hope he falls asleep soon!
Posted by Kellsey at 9/13/2006 01:51:00 PM