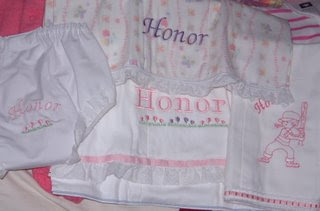 I finally found the box of things I had folded away two years ago that had a bunch of things in it for "Honor." For anyone reading this who might not know, Honor was the child we thought we were having when we had Aidan. In other words, we were told it was a girl, but sometimes those sonograms can be tricksy!

Anyways, I had received bunches of girl clothes, etc. at my baby showers and when we found out Honor was in fact Aidan, I took most everything back and exchanged girl stuff for boy stuff. It was fun. It was like having several big shopping sprees. There were a few items, however, that I either could not or did not return. Obviously, anything with Honor's name monogrammed on it did not get returned. ;-)

There were also some very cute little outfits that I either could not bare to part with because they were just so darn cute and I still had hopes to have a girl one day, or else I had no idea where the gift came from and so I could not take it back.

Well, after our sonogram yesterday revealing that this baby is a girl, (and this time the sonogram was MUCH more clear about things), I decided that I simply MUST find that box--the "Honor Box". Today I found it, and I am so glad. This little girl is Honor, and now she has some very cute things to wear and some simply fabulous burp cloths upon which she can spit!

The first new things that I bought her are her 2 hot pink, 1 baby pink, 2 bubblegum pink, and 1 lavender fuzzi bunz cloth diapers. I had already ordered some gender neutral colors such as black, white, turquoise, red, and lime green (just to name a few). Anyways, she will have a full set of diapers, and some fabulous gifts from 2004. YEA for finding the "Honor Box"!!!!
Posted by Kellsey at 9/06/2006 09:14:00 PM