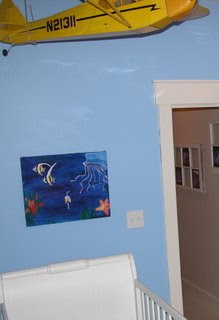 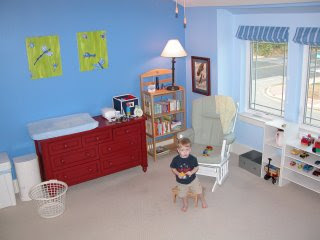 Well, as you probably have surmised by now, we completed painting Aidan's new room. It has three different colors, but it is difficult to see the difference between the color in the window inset and the wall into which the wall is actually inset. It almost looks like the reason the inset is lighter is just because the sun is coming in through the windows, but do not be deceived. It is actually a whole shade lighter. "Windmill Wings" should not be confused with "Summer Blue".

Anyways, you can see the dresser that I found at the Pottery Barn outlet, and in the other picture you can see the airplane above Aidan's crib that used to belong to Macon--a gift from his paternal grandfather. Macon's parents have been waiting (very patiently I might add) for that plane to leave their house for at least the last 8 years.

The Big Boy bed is not yet in effect, as Aidan still loves his crib. We are very happy for him to remain in said crib until he wants to leave it. This means that we'll be using a bassinet and port-a-crib for Baby Honor for as long as we can get away with it. Who knows, maybe she'll sleep in her carseat or Kick-n-play bouncer seat for the first 4 months like Aidan did. He was physically unable to lay flat for at least a few months after being born. The doctors guessed it was because he had been doing a pike position for so long in the womb that the muscles, tendons, and ligaments needed time to relax and stretch the other way. It did mean strapping him in at night (which sounds very strange I realize), but it worked and he slept. Which of course means that we slept, too.