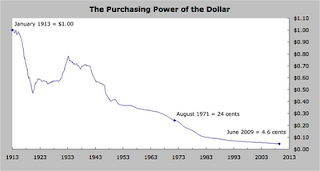 The . . . graph is at least some evidence that the experiment of a Federal Reserve System (created in 1913) with no explicit link to gold, and no effective external check on its activities, has failed the public’s interest.

-Again, from the AIER's research reports. This one here.

Assume that I invest my money in a Certificate of Deposit. During the term of the Certificate of Deposit, the investment earns interest. That interest will be taxed, however, so that the after tax return is reduced by at least one-third (and soon to be, I predict, at least 50%). At the end of the term, when I take my dollars out, those dollars are worth less than they were when I bought the CD, if the trend shown by the draft continues. And that diminution in value may not be made up by what the investment earned on an after-tax basis.

This example assumes that the bank does not fail. If it does fail, I will get my principal back, at least to the extent of the FDIC coverage, if any. And even in the case of FDIC coverage with regard to principal, there is no coverage for the interest. My guess is that if my bank fails, then a lot of other banks may be failing and the government currency printing presses will be working over-time, with the end result that the purchasing power of my investment will be even less when the CD matures.