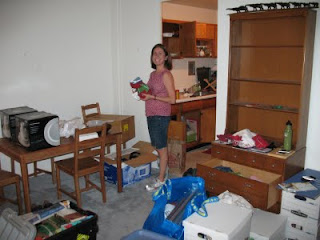 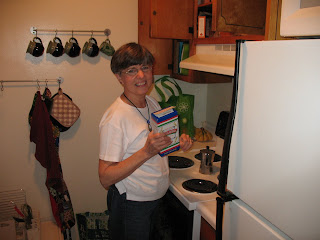 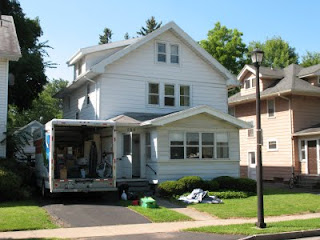 Whew! Here it is already Sunday evening, and the events of the past few days are piled so, one on another, that it seems like a continuous stretch, with now and then a pause for food and naps. Let me see whether I can remember exactly what happened. Or approximately, anyway.

Sometime maybe two or eight months ago or perhaps it was just this past Wednesday, Carol and I drove up to Ft. Lauderdale airport to catch a SW Airlines flight to Philadelphia, arriving in mid-afternoon. Mary was there to pick us up, and around to her Byrn Mawr neighborhood we went. She had dealt with her last exam of her last course (bio-chem) just the previous Monday, dispatching it deftly. (Nothing but A's during her entire of "post-bac" year, with an A minus here and there. Jane Austen would have been proud of her.)

Mary had already had made good progress packing up her apartment, and Carol and I plunged into the fray. We took time out to go out to dinner at a good Chinese restaurant nearby with one of her friends, and then back it was to her apartment where we worked until well after 10.

The next morning, we were up early. (You know how Carol is.) Fortifying ourselves with oatmeal, fruit, and muesli, again it was to work. At lunch time we broke for "The Santa Fe Burrito" and had not exactly Tex-Mex, veggie burritos, which were great, and then over to a nearby gas-station to pick up the U-Haul truck Mary had reserved. The truck looked really big to me, but then I thought that if Mary's apartment in Rochester didn't work out, she could probably sleep in it for a least three or four weeks without a problem.

According to our carefully pre-arranged plans, we went straight to Ikea, I driving the truck through Philly expressway traffic,with Carol in the co-pilot's seat, offering encouragement, and Mary leading in her car. At the Ikea, we dropped off the truck in the parking lot, and Carol and I joined Mary in her car. From there we made our first visit of the trip to a Target at another shopping center about a mile away. I don't remember whether we bought anything at the Target or were simply doing the initial check-in with those folks, because that Targets have turned out to be our home away from home since then.

After the Target check-in, it was back to Ikea where we bought several things for Mary's Rochester apartment (mainly a bed), although the real purpose of the trip was to have a cheap Ikea frozen yogurt cone, notwithstanding our general prohibition of all things dairy. (We do make exceptions, if it's really important.)

By the time we got back to Mary's apartment, parking the truck in the far reaches of the apartment house parking lot, it was time to clean up for another night on the town with some more of Mary's friends, this time to an Indian restaurant in "Center City," which is downtown Philadelphia. We had eaten at this place on our last visit and had enjoyed it. It did not let us down this time either. We capped off dinner with an Italian Ice at a place across the street, hewing to the vegan line this time. After dropping off Mary's friends, it was back to her apartment and we continued packing till nearly mid-night. Bewitching hour was noon the next day, when we were to be out of there.

Promptly at 5AM Friday morning I rolled (literally) off the air mattress, got dressed, and went down to the parking lot and brought the truck up to the basement entrance of the building. Mary had reserved a spot for our loading process, and the facility allowed good access for that task. Then it was up from the truck to Mary's fourth floor apartment, then back down to the truck with the dolly, time after time, as Carol and Mary worked on cleaning up the apartment.

The two young men whom we had taken to dinner the night before had volunteered to help us load, and Mary went to get them at 9AM. By then a lot of the easier stuff was in the truck, and their arrival meant we had some great help with the heavier pieces of furniture. Just about 11:30AM the truck was completely loaded and I was in the shower. The truck turned out to be just the right size to pack comfortably. If it had been much smaller, I would have had to take extra time to squeeze in everything, and we would not have made the noon deadline.

Carol and Mary had done a marvelous job on the apartment in the meanwhile, especially turning the kitchen into "sparkle city." Carol was putting the finishing touches on the bathroom as the management people came up to see how we were doing. They took a quick look around and offered Carol a job on the spot. They were about to leave, when I just had to insist that they look at the oven, to which Carol had devoted great effort. They were amazed. I am sure no one has ever left an apartment as spotless as Carol and Mary did.

We went to Bruegger's for lunch (hummus on whole-wheat with lettuce tomato and onion - not bad) and off we drove to Rochester. Mary leading the way in her Corolla, my driving the truck, and Carol co-piloting with me. It was REALLY a long trip. There was lots of construction on the highway, plenty of one-lane slow-downs, and the weather was rainy. As my dad would say, it was "teed-jus" and that to an extreme.

But there were moments of relief. We drove straight north from Philadelphia, up to Scranton, and then into New York. The drive grew more and more scenic, until, by the time we reached the state line, the hills were rolling and verdant, with prosperous farms in the valleys. After a lifetime of associating "New York" and "urban" as if the two shared the same genetic code, distinguishing the former only by its neon letters, the country through which we drove was a very pleasant surprise.

We neared Syracuse about supper-time. Not far off the by-pass Carol had discovered that there stood an L.L. Bean outlet store. Notwithstanding our single-mindedness about getting Mary to med school, we veered off track suddenly, finding that store in a nice shopping center that even had a Mediterranean restaurant. To shoppers like Carol, an LL Bean store of any sort would be a great visit, and an outlet store is the equivalent of Disney World. As for me, I would have given anything to get out of that truck for awhile, even though I knew we would be getting into Rochester, still 80+ miles away, pretty late.

The final stretch of interstate seemed endless, but some time after 10 we arrived. We had transported a futon bed of one of Mary's friends from her Bryn Mawr program and who is also going to URMS, so our first stop was a giant med-school apartment building on campus. After we unloaded the bed, we went by Mary's new living quarters (to which I will henceforth refer as her "house," even thought she occupies the top floor of a small, formerly single-family residence that has been converted to a duplex) just to check it out. We spent the night in a nearby Hampton Inn, however, thus continuing a tradition of spending the first night of trips north to school at this hotel chain.

Yaaaay! Thanks for the report! I've been eagerly refreshing mary's page, my facebook page, and kith and kin to find out what's going on. :-)