We are back in our room at the B&B, after being wide-eyed tourists afoot all day in downtown Toronto. We were well provisioned before we set out this morning by our hostess, Michele. She prepared a delicious breakfast, one centered on a vegan crepe, itself wrapped around baked apples and pears and garnished with fresh strawberries and blueberries. In addition, there were other fruit, granola (of course!), several kinds of breads, yogurt, orange juice and coffee. At table we had a pleasant conversation with three other guests at the breakfast table, two of them dance instructors who are attending an annual, one-week conference at the National Ballet School of Canada.

After breakfast, we walked around the corner and north one block to Bloor Street, one of the major cross town streets of the city and on which the major department stores, the ManuLife main office buildings, the University of Toronto, and the Royal Ontario Museum are located. Our first stop was the Royal Ontario Museum, where the museum was holding a special exhibition on the Dead Sea Scrolls ("Words that Changed the World").

The Dead Sea Scrolls exhibit was very well done. Some of the manuscripts found in the caves at Qumran date from 250 BC and include all the books of the Old Testament except for the Book of Esther. The Israeli Antiquities Authority co-sponsored the event, and permitted a few of the scrolls to come over. Of course, there was an effort to keep the exhibition politically correct, and one exhibit panel explicitly stated that the messianic texts in Isaiah did not point to Jesus. But, really, any one examining the exhibit with half an open mind would have to be impressed with the connection of the scrolls not simply to Judaism or to Christianity because of its connection to Judaism but also with the direct connection between the messianic texts and Jesus Christ: thus the felt need to state outright that none of this had anything to do with the Redeemer.

There was a less than half-hearted effort to include Islam into the mix, but it clearly was a stretch. There was a reference or two to the idea that the scrolls are connected to the three "great Abrahamic religions," but the subtext was the profound link of the Jews to Jerusalem and to Palestine. The Dead Sea Scrolls give strong witness to that link. I certainly would affirm that connection, even as I roll my eyes about the "this-is-not-about-Jesus" statement that the exhibit includes. I imagine that Fatah and Hammas and their ilk would view the exhibit simply as Israeli propaganda. But the exhibit illuminated a part of history about which we knew something but really not enough, and it was a great way to spend the morning.

We had lunch at a Freshii, a natural food fast-food place down the street from the museum. From there, we went to the Bata Shoe Museum, where several people, including Susan Thomas, the B&B host and the two dance instructors at breakfast, insisted we go. But a shoe museum? Well, OK, we went, and it was fun and serious too. Mrs. Bata, she of the family that founded the company, was a shoe collector, and her collection got so big that she created a museum, and this is where we went. We are now among those who would insist that you go if you visit Toronto.

We walked past two Anglican churches, the more impressive of which was St. Paul's. In the front yard of the church is a war memorial to the dead among the Canadian armed forces. Chiseled on its sides were the names of battles in which their regiments fought, and nearly all those battles were those where Canadians bled and died alongside their American cousins. May God continue to bless Canada, for what a blessing it has been to our country. As critical as we can be of Canada from time to time, her benign kinship is, of course, something never to forget. A trip to Toronto and a moment before that monument will aid that memory, I can tell you.

In the intervals between the museums and lunch, Carol and Mary did some shopping, looking for shoes for Mary, and we spent at least an hour in the Canadian version of Barnes & Noble, known as Indigo Books. Mary had learned from Melissa during a visit to her house a month or so ago that a Canadian doughnut chain known as "Tim Horton's" had bought out all the Dunkin' Donuts shops in Manhattan, and we had seen at least one in Rochester. Being a former Dunkin' Donut addict, I wanted to compare the two, and so we went into a Tim Horton's on Bloor Street so I could take a look. I bought a glazed doughnut for an important international taste test. To my utter consternation it was a cake-doughnut! Friendly neighbor or not, Canada has it all wrong on glazed doughnuts. I hope that Dunkin' and Krispy will be able to hold the fort against this invader, even though I don't partake of that sort of food any more, except for the sake of controlling our borders.

For supper, we had another vegan restaurant in mind, and like the one last night it was a little hard to find. Unlike the one last night, it was closed, and so we had to quickly change plans. Not far away was a Whole Foods grocery store. There we found the familiar salad bar and had a good supper as we talked about the day.

Tomorrow, alas, will be our last day with Mary for awhile. She will drop us off in Buffalo in the afternoon for our flight back to Ft. Lauderdale, and then she will continue on to Rochester for the beginning of her next great adventure. I don't like these good-byes a bit.

The photo below is of the Royal Ontario Museum. It does not do credit, however, to the scale and beauty of the building. 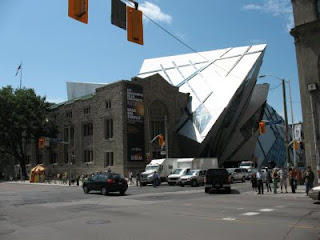